Words and Their Stories: Fall Guy

Update Required To play the media you will need to either update your browser to a recent version or update your Flash plugin.
By Marilyn Rice Christiano
13 October, 2012

Every week at this time, the Voice of America tells about popular words and expressions used in the United States. Some expressions have made a jump from sports events to everyday life. One such expression is fall guy. A fall guy is the person who someone decides will be the loser or victim.

The first fall guys were men who wrestled for money. At the end of the nineteenth century, wrestling was a very popular sport in the United States. Wrestling competitions were held not only in big cities, but also at country fairs and traveling shows. As the sport became more popular, it became less and less of a sport. Many of the matches were fixed. The wrestlers knew -- before the match -- which one of them would be the winner.

The goal in wrestling is to hold your opponent's shoulders down against the floor. This is called a fall. Sometimes, one of the wrestlers would be paid before the match to take the fall. He would agree to be the loser...the fall guy.

Today, a fall guy is anyone who is tricked into taking the blame for the crime or wrongdoing of someone else. There are fall guys in many situations -- people who publicly take the blame when something goes wrong. 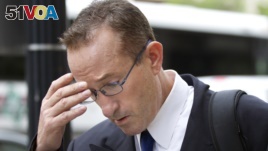 Brian McNamee says he was the "fall guy" for baseball player Roger Clemens
A fall guy takes the rap for something wrong or illegal. He accepts responsibility and punishment for what someone else did. The fall guy may have been involved in the situation, but was not the person who should be blamed.

The word rap has meant blame for several hundred years. The expression to take the rap first was used about one hundred years ago.

Another similar expression is bum rap. A person receives a bum rap if he is found guilty of a crime...but is really innocent.

Sometimes, a fall guy may not realize he is the fall guy until he is the victim of a bum rap. In that case, he may feel that he has been framed. To frame someone is to create false evidence to make an innocent person seem guilty.

Some word experts say the expression to frame someone comes from the way wood must be fitted closely around a painting or photograph to frame it. In the same way, evidence must be designed perfectly if it is to frame an innocent person to make him or her seem guilty.

This VOA Special English program WORDS AND THEIR STORIES was written by Marilyn Rice Christiano. This is Warren Scheer.