This House Is Haunted!

Update Required To play the media you will need to either update your browser to a recent version or update your Flash plugin.
By Anna Matteo
28 October, 2017

In most parts of the United States, the month of October brings tasty foods such as pumpkin pie and apple cider. But it also brings scary creatures, such as witches and monsters!

Some say those creatures appear on October 31, known as Halloween. For those who celebrate it, Halloween is the day to scare or be scared. 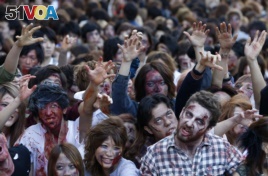 Zombies are also commonly seen at Halloween. Here, people dress as zombies during a Halloween event to promote the show "The Walking Dead" in Tokyo October 2013.

One popular activity is to go to a haunted house. A "haunt" means the spirit of a dead person – a ghost. Some people claim that their houses are haunted by people who used to live there. They say they hear mysterious footsteps on the stairs, or find objects in places where they did not leave them.

On Halloween, some American towns also create haunted houses to frighten children and adults, alike. They are invited to enter a dark doorway, only to be terrified by people dressed as ghosts and vampires. This is considered entertaining. Dracula is probably the most famous vampire. This is Dracula's castle in Bran, Romania.

The word "haunt" also has a non-scary meaning. As a noun, "haunt" is a place where you often go. In other words, it's your hang out. This usage comes from an Old French word of the early 14th century (hanter) meaning "place frequently visited."

You can also say a bad thing you did or a bad decision you made comes back to bite you.

Both phrases mean basically the same thing. Feel free to use "come back to haunt you" in any situation – either official or casual. However, save "come back to bite you" for a more informal situation.

Now, let's get back to being haunted.

When we think about something all the time in a way that makes us sad or upset, we can say we are haunted by that thought or image.

Here is an example: For the rest of his days, he was haunted by the look on his lover's face before she fell from the waterfall to her death in the raging river below.

To use "haunt" in this way, the memory must be sad or upsetting. No one has ever been "haunted by" a happy memory.

Let's hear these words in an everyday conversation.

So, Magdalena, this restaurant is my favorite. I come here all the time. It's one of my haunts. If you like burgers, I would order the ...

Oh, I'm sorry. Then how about the Caesar Salad?

Let me guess. He loved Caesar Salad too?

No. No, his name is Caesar. Ricardo, please forgive me. You see, that's why I moved to Seattle from Brooklyn. I needed the distance. I'm running away from his ghost.

Well, he didn't actually die. I mean, our love died. He was the love of my life. But one night I made a bad decision. I kissed someone else – his best friend.

Well, yeah, that was a really bad decision. Bad decisions like that one usually come back to haunt you. Did he find out?

Every time I looked at him I thought about it! My guilt haunted me day and night. So I told him everything. I knew that he would forgive me. The thing I love most about him is that he is so forgiving.

He broke up with you, didn't he?

Immediately. I mean, he left and never looked back. But not me. I could not even live in the same city. Every place I went, I was haunted by the memory of us -- the movie theater where we went on our first date; the store where we bought cat food for his cat; the bank where we cashed in our loose change every Saturday morning.

Wow. That's tough. Moving sure sounds like a good idea. You know what, forget about all the burgers and Caesar Salad. Let's order a big pizza!

He worked in a pizza shop.

Have you ever been haunted by a memory? Tell us about it using these "haunt" expressions. Or practice writing a scary scene using "haunt." You can do both in the Comments Section!

Anna Matteo wrote this story for VOA Learning English. Kelly Jean Kelly edited it. At the end of the program, Sade sings "Haunt Me" at the end.

vampire – n. a dead person who leaves the grave at night to bite and suck the blood of living people