Update Required To play the media you will need to either update your browser to a recent version or update your Flash plugin.
By VOA
Oct 11, 2017


On October 4th, the Iraqi Security Forces supported by the U.S.-led Global Coalition to Defeat ISIS, liberated the town of Hawija and over 150 surrounding villages from ISIS, along with as many as 85,000 civilians who had been trapped there. Hawija was the terrorist group's last stronghold in northern Iraq. ISIS has now lost control of almost all the territory it once held in Iraq, except for a small area in western Anbar along the Euphrates River Valley and out to al-Qaim, located on the Iraqi-Syrian border.

ISIS seized Hawija during its 2014 offensive in northern Iraq that also resulted in the fall of the strategically important cities of Sinjar, Tal Afar, and Mosul. By the end of 2014, ISIS declared Mosul to be its capital in Iraq. 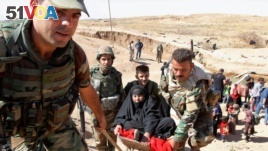 Kurdish Peshmerga forces help people, who fled from their homes in Hawija, in southwest of Kirkuk, Iraq October 4, 2017.

To counter the terrorist group's rapid expansion and begin rolling it back, the United States and partner nations formed a global coalition that countered ISIS with a series of airstrikes in September 2014. Over the past three years, the Coalition liberated the captured cities, and destroyed ISIS in its safe havens, hamstrung its capacity to generate revenue through theft of local resources, antiquities, and oil, and hobbled its ability to recruit foreign fighters, move funds, and spread false propaganda over the internet and social media.

Ultimately, the Coalition's support enabled Iraqi Security Forces to take on ISIS and defeat the terrorist organization. Hawija is the latest ISIS-held city in Iraq to be liberated. A similar campaign is even now in progress in Syria, where U.S.-backed Syrian Democratic Forces are in the midst of an all-out assault on the city of Raqqa, ISIS's Syrian capital.

"The Iraqi Security Forces continue to prove they are a battle-hardened, professional force dedicated to ridding their country of an evil enemy," said the Coalition in a written statement.

"While the liberation of Hawija is a significant milestone, an ISIS presence remains in Iraq, and the Coalition will continue to stand side-by-side with the ISF in their collective mission to defeat ISIS."