U.S. Assistance for the Rohingya People


The Rohingya are a Muslim minority population in Burma's Rakhine State. However, the Burmese government claims they are illegal immigrants from Bangladesh and has made the Rohingya the world's largest stateless population. For decades, the Rohingya people have suffered severe human rights abuses, including restrictions on freedom of movement and freedom of religion, curfews, forced labor, restrictions on reproductive rights and marriage, and heavy security presence in their villages. Without official authorization, which can be nearly impossible to obtain, they cannot travel between villages – not even to seek education or medical treatment.

On August 25th, a group of Rohingya militants attacked dozens of police posts and an army base in what they said was an effort to protect their people from persecution. This resulted in the deaths of 12 Burmese personnel. 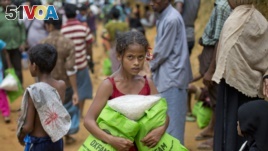 According to the United Nations, the response of Burma's security forces was disproportionately severe, and included shelling of civilians, arson and widespread extrajudicial killings. Over five hundred thousand Rohingya have fled to neighboring Bangladesh, a country already overpopulated and struggling to meet the needs of hundreds of thousands of refugees.

This contribution brings the total U.S. humanitarian assistance for internally displaced persons within Burma, and refugees from Burma in the region, to nearly 104 million dollars in fiscal year 2017. The funds will help provide emergency shelter, food and nutritional assistance, health care, psychosocial support, clean water, sanitation and hygiene. They will assist with disaster and crisis risk reduction, help restore family links, and provide protection to displaced persons in Burma, Bangladesh, and in the region.

The United States calls upon Burmese authorities to bring an immediate end to violence in Rakhine State and allow for unfettered humanitarian access to all people there. The United States further calls on Burmese authorities to grant full media access to affected areas, hold accountable those responsible for human rights violations, and enact policies that ensure any returns are voluntary and conducted in conditions of safety and dignity. We ask that others join us and donate generously toward humanitarian assistance for those affected by the crisis.