Update Required To play the media you will need to either update your browser to a recent version or update your Flash plugin.
By VOA
Jan 6, 2018


The United States welcomes the urgent and long awaited medical evacuations that took place from Eastern Ghouta in Syria between December 27 to the 29th.

In a press statement released December 29th, U.S. Department Spokesperson Heather Nauert said the U.S. also extend its gratitude “to the humanitarian and medical professionals on the ground for their compassion and tireless work. Their dedication and efforts to save lives in the most difficult of environments illustrate the best in humanity.”

Although the evacuation and treatment of 29 of the more than 600 critically ill patients is a step in the right direction, the United States remains extremely concerned about the dire situation in Eastern Ghouta and the continued ruthless siege by the Assad regime. 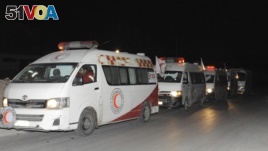 In this photo released by the Syrian official news agency SANA, ambulances of the Syrian Arab Red Crescent line up during a mission to evacuate sick and wounded people from the eastern Ghouta, near Damascus, Syria, Dec. 28, 2017.

Hundreds in the besieged area still await medical evacuation, and many have died as they wait. It is a cruel reminder of the regime's unbridled brutality.

In Eastern Ghouta, the Syrian regime continues to deliberately use tactics to starve Syrian civilians, including women and children, block humanitarian aid and critically needed medical supplies, and bomb hospitals, medical personnel, and first responders, all to preserve its grasp on power.

No aid convoys were given access during the entire month of December. If proper medications and supplies were allowed, more than half of those needing medical evacuation could stay in Ghouta. Bashar al-Assad and his regime continue to regard the lives of the Syrian people as nothing more than bargaining chips. Katr Alnada, a critically ill six-month-old baby girl who ultimately died before being evacuated, is only one of many the heartbreaking examples.

“We repeat our call on Russia to live up to its obligations to ensure that the Assad regime ends these barbaric attacks against civilians in Syria,” said Spokesperson Nauert.“The Syrian regime must allow all medical evacuations in the besieged area, as well as the flow of medical supplies and humanitarian aid.”

“Now, more than ever,” Ms. Nauert said, “Russia and the international community must vigorously support unhindered humanitarian access to all of Syria and pressure the Assad regime to credibly negotiate a lasting political resolution to the conflict through the UN-led Geneva process.”