Update Required To play the media you will need to either update your browser to a recent version or update your Flash plugin.
By VOA
Dec 29, 2017


The United States is assisting law enforcement in Senegal with a donation of critical, non-lethal law enforcement equipment and materiel to the country's national police.

At a ceremony on December 20th at Senegal's National Police Academy, U.S. Ambassador to Senegal Tulinabo Mushingi said the U.S. counts on Senegal as a crucial partner in the region, and the police as a vital bulwark to the multitude of threats and challenges facing both nations. 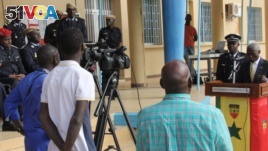 “Terrorism remains a scourge that we must continue to fight, and this donation of equipment such as computers, projectors, night-vision goggles, crime scene kits, and protective equipment will provide additional support to bolster the national police's mission,” said Ambassador Mushingi.

He noted that recently the Embassy's Regional Security Office and the Department of State's Bureau of Counterterrorism and Countering Violent Extremism wrapped up a training series implemented by the Bureau of Diplomatic Security's Antiterrorism Assistance Program designed to better protect against and mitigate the impact of a terrorist attack on soft targets for the Senegalese Law Enforcement community and first responders, including the interagency Coordination of Counterterrorism Operations mechanism established by presidential decree last year (CICO).

Altogether, approximately 110 personnel have benefitted from these recent training events for a significant engagement between the U.S. and Senegal. The latest U.S. donation, worth nearly a half billion franc CFA (439,000,000 CFA or $739,000) is a significant contribution to the ongoing partnership.

Paraphrasing Senegal's President Macky Sall from the Forum for Peace and Security, Ambassador Mushingi said “the need for “integrated solutions” across the region was emphasized. Training and equipment are at the heart of this integrated solution and we are happy to provide this protective and didactic gear to the government of Senegal to seek these integrated solutions.”

“To this end, we are glad to bolster the police officers and especially all the first responders who we depend upon to act in the event of troubles or a deliberate attack,” said Ambassador Mushingi.

“To our friends in the National Police and other Senegalese security services: thank you for your assistance. We hope this equipment will help you with your mission.”