Update Required To play the media you will need to either update your browser to a recent version or update your Flash plugin.
By VOA
Dec 25, 2017

The Security Council has taken a leading role in condemning North Korea's unlawful nuclear and missile programs and imposing consequences. Secretary Tillerson urged each UN member state to fully implement all existing UN Security Council resolutions. "For countries who have not taken action," said Secretary Tillerson, "I urge you to consider your interests, your allegiances, and your values in the face of this grave and global threat."

The United States believes more must be done to reign in North Korea. Last spring, the United States initiated economic and diplomatic sanctions with the intent of pressuring the regime to engage in serious negotiations toward the complete abandonment of its nuclear weapons programs. Over the past year, many allies and partners of the United States have joined in these efforts. "We ask these nations to continue to increase pressure through unilateral action," said Secretary Tillerson. "Doing so will further isolate North Korea politically and economically, cutting off support" for its nuclear weapons program. 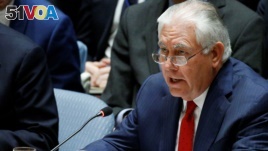 North Korea has a choice, said Mr. Tillerson. "It can reverse course, give up its unlawful nuclear weapons program, and join the community of nations, or it can continue to condemn its people to poverty and isolation."

Secretary Tillerson reaffirmed that "all options remain on the table in the defense of our nation, but," he added,. . .our hope remains that diplomacy will produce a resolution."

The U.S. will continue to hold North Korea accountable for its reckless and threatening behavior. Secretary Tillerson said, "We ask all to join a unified effort to achieve a complete and verifiable denuclearization of the Korean Peninsula."