Update Required To play the media you will need to either update your browser to a recent version or update your Flash plugin.
Zlatica Hoke
March 01,2016


WASHINGTON— An Israeli company that manufactures devices for making fizzy drinks at home was forced to lay off its Palestinian workers after relocating from the West Bank to Israel because the Israeli government refused to give them work permits. Some Israeli businesses are leaving the occupied Palestinian territories under the pressure of worldwide criticism and a Palestinian-led boycott campaign.

The SodaStream plant in the southern Israeli town of Levahim was forced to let go of the last 74 of its Palestinian employees Monday. They came with the company after its West Bank plant closed in October.

"There is no hope in Palestine. There is little work; we can't be happy there like we were happy here," said Anas Abdul Wadud Ghayth, a Palestinian who worked for SodaStream.

The management said it would fight the government's decision.

"If the government of Israel does not allow the Palestinians to get to their jobs, I will bring those jobs to the Palestinians. That is not a threat. It is a fact," said Daniel Birnbaum, SodaStream’s CEO.

The company employed about 500 Palestinians in its West Bank plant, but decided to close it after a Palestinian-led call for the boycott of Israeli products proved effective.

"The boycott, divestment and sanctions campaign is one of the most peaceful and non-violent forms of resistance of the Palestinian people to achieve freedom, justice and peace. It's not against Jewish or Israeli people; it's against apartheid, against occupation, against the policy of the Israeli government which is preventing peace here. And like it has succeeded against apartheid in South Africa at one point in time, it will succeed in Palestine," said Mustafa Barghouti, a Palestinian legislator.

The movement has its supporters worldwide. Last year, the European Union imposed a labeling regulation requiring Israeli companies to clearly mark whether their products were made in the occupied territories. 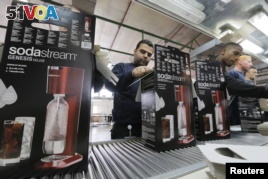 FILE - Employees pack boxes of SodaStream appliances at its factory in the West Bank Jewish settlement of Maale Adumim Jan. 28, 2014.

The Israeli government is calling such moves anti-Semitic and is launching its own campaign to suppress them, including an effort to bring U.S. celebrities to Israel.

"We are inviting the Oscar nominees, and those whom they decide to take along with them, for a dreamy visit in Israel," said Amir Halevi, the director general of Israel’s tourism ministry.

The invite has been fiercely resisted by a U.S. group campaigning for an end to Israel's occupation of the Palestinian territories.

"We think it's important at this time that they (the celebrities) think about the issue of Palestine as well and not take the bait and not take the trip to act as apartheid lackeys in this casting call by the Israeli government," said Yousef Munayer of the U.S. Campaign to End the Occupation.

Even some Jewish groups support economic pressure on Israel to halt the construction of settlements. But last month, the British government banned the public sector boycotts of Israeli suppliers, giving a boost to Israel's battle against a Palestinian-led international boycott campaign.