Update Required To play the media you will need to either update your browser to a recent version or update your Flash plugin.
Joe DeCapua
June 11,2015


The Red Cross said food insecurity for more than four million people in South Sudan is near famine levels. It warned many people could face starvation if violence continues. An upsurge in violence is blamed for the displacement of about 100,000 people in the last four weeks.

The latest displacement of South Sudanese is in addition to the two million already forced from their homes by a year and a half of conflict.

In Juba, International Committee of the Red Cross spokesman Jason Straziuso said many are fending for themselves in the bush. 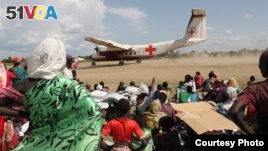 “In these areas they simply don’t have access to food. And we think that many of them are going to stay there for a long time in order to keep safe – away from the fighting that’s taking place. So, we’re worried about the nutritional situation in the coming weeks and months.”

The displaced are in areas with little or no chance of having livelihoods. And there are rising food prices and few social services.

“Generally speaking,” he said, “it’s the northeast part of the country. Specifically, we’re looking at three states – Unity State, Upper Nile State and Jonglei. And one of the locations we’re most worried about is in Unity around the town of Leer. We’ve had major operations there over the last year distributing food to people who need it because there’s no functioning market. Food is not making its way there, so it’s simply not available.

Straziuso said Red Cross operations have been affected by the fighting.

“First of all, most importantly, we had to abandon our offices in Leer last month when violence approached the town. Our office is empty and therefore our operations are not working there. And what we do is medical and food in that region. We’re still able to do some medical evacuations. We’ve done three medical evacuation flights from Leer in the last two weeks. And we’re still doing emergency food drops,” he said.

However, he said air drops are expensive and not sustainable in the long-term for the numbers of people who need help.

“We’re looking at future problems as well because this is the planting season and the people around Leer, in particular --who have fled -- they’re not planting. Or if they do get a chance to plant they’re not tending to their crops.”

One South Sudanese man told the Red Cross there’s little incentive to plant or tend crops because people may soon be displaced again or lose their crops to bad weather.

Straziuso said the ICRC is making an emergency appeal for $23 million for its South Sudan operations.

“Our South Sudan operations for the International Committee of the Red Cross are the second largest in the world behind our activities in Syria. And we’re going to put these funds to more food distributions. We also distribute seeds. And of course we have five surgical teams out in the field, who are operating on the people, who are wounded in war. And just last month, they did many, many more of those emergency surgeries than they have for the rest of the year combined,” he said.

The Red Cross is calling on warring parties to respect international law and allow humanitarian workers and aid to reach those at risk. It says civilians are not part of the conflict and should never be targeted.

In related news, The U.N. World Food Program says it plans to cut food rations to about a half-million Somali and South Sudanese refugees in camps in northern Kenya. It blames that on a funding shortfall, adding it needs nearly 12 and a half million dollars to avoid – what it calls – “a critical food gap.”