Update Required To play the media you will need to either update your browser to a recent version or update your Flash plugin.
By VOA
Apr 18, 2017


The U.S. Agency for International Development, or USAID, announced this month a new grant to support the work of the National Election Committee, or NEC, to administer Cambodia's 2017 and 2018 elections. The two-year, $1.8 million dollar Cambodia Election Management Project, awarded to the International Foundation for Electoral Systems, will help the NEC implement voter education campaigns, strengthen its election dispute resolution processes, and enhance its ability to identify and mitigate weaknesses in the country's electoral system.

This program follows previous USAID support for the National Election Committee, which included an internal capacity assessment, training on election administration, and assistance to produce a set of public service announcements about voter registration. The new grant will help ensure the NEC follows through on its commitment to effectively administer elections and advance meaningful electoral reform through the commune elections in 2017 and national elections in 2018. 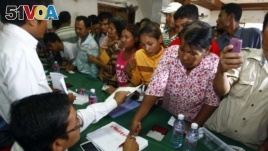 USAID was founded in 1961 by President John F. Kennedy and serves as the lead agency of the U.S. Government for foreign assistance. Since 1992, USAID has invested approximately $1 billion dollars towards Cambodia's development. The International Foundation for Electoral Systems supports citizens' rights to participate in free and fair elections. Its independent expertise strengthens electoral systems and builds local capacity to deliver sustainable solutions. Since 1987, IFES has worked in over 145 countries – from developing democracies, to mature democracies.

“Electoral participation is the foundation of a healthy democracy,” said U.S. Ambassador to Cambodia William Heidt. “We look forward to working with the National Election Committee, civil society, and political parties to continue to strengthen democracy in Cambodia.”