Asian-American Lawmakers Fight to Keep ‘Dreamers’ in US

Update Required To play the media you will need to either update your browser to a recent version or update your Flash plugin.
By Pete Musto
14 September, 2017


United States lawmakers stood with undocumented Asian-American immigrants earlier this week to show support for the young students and workers living in the country.

Their future is uncertain after President Donald Trump's administration announced plans to cancel the Deferred Action for Childhood Arrivals, or DACA, program.

Former President Barack Obama's administration created the program in 2012. It permits people who entered the country illegally as children to stay in the country to work or study. 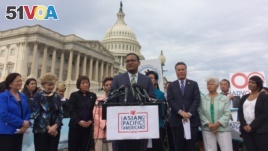 More than 800,000 young people are part of the program. They are sometimes called "dreamers."

California representative Judy Chu is the head of the Congressional Asian Pacific American Caucus. The group of politicians supports Asian-American interests. She led a news conference on Tuesday outside the U.S. Capitol building in Washington, D.C.

She said, "We are here to fight for the 800,000 dreamers, including the 130,000 Asian-American Pacific Islander dreamers who were brought to this country as children through no fault of their own."

That is the number of Asian immigrants in the United States who are eligible to apply for the DACA program, according to Obama's administration.

The National Council of Asian Pacific Americans says that about 16,000 Asian-American Pacific Islanders are part of the DACA program.

Chirayu Patel formed the DACA network, an organization that provides information and legal resources for DACA recipients. He said at the news conference this week, "I am a dreamer and the U.S. is the only country I have ever known."

Congressional lawmakers now have six months to act if they want to continue to permit current DACA recipients to stay in the U.S.

Former House Speaker Nancy Pelosi and other political leaders stood with Judy Chu and Chirayu Patel on Tuesday. They did so to urge Congress to pass a piece of legislation that would provide DACA recipients with a more permanent path to staying in the US.

Representative Pramila Jayapal of Washington state is the first South Asian American woman elected to Congress. She told VOA, "It's not just one group of people that's affected by this, it really is communities across the country – Africans, AAPIs, Latinos."

Researchers at AAPI (Asian American Pacific Islander) Data and the Center for Migration Studies report that one in seven Asian immigrants in the U.S. is undocumented. And Asian-Americans and Pacific Islanders are the fast-growing undocumented population in the United States.

Karthick Ramakrishnan is a public policy professor at the University of California Riverside. He is also the director of AAPI Data. He told VOA, "Most people are blown away when they learn this."

Of the 130,000 Asian immigrants said to be eligible for the DACA program, relatively few have actually applied.

Jayapal said, "There are a lot of AAPI dreamers who have not stepped up and applied for DACA status...We want to make sure that the AAPI community knows exactly what is still available to them and that they get involved."

Several organizations work to share information and provide support to the community in a number of different languages. The National Korean American Service and Education Consortium is one of them. It helped Jung Bin Cho apply for DACA protection.

Cho moved to the U.S. state of Virginia when he was seven years old. He told his story at the Capitol on Tuesday. He explained the importance of the Asian-American and Hispanic communities in the United States working together. He said the two groups must work together to push Congress to pass legislation that would protect them both.

"I'm putting another voice out there that's very important," Cho told VOA, hoping to make it clear that not all DACA recipients are from Latin America.

Esha Sarai reported this for VOA News. Pete Musto adapted it for Learning English. Ashley Thompson was the editor.

We want to hear from you. What protections do you think governments should provide for immigrants whose parents brought them into a different country illegally when they were children? Write to us in the Comments Section or on 51VOA.COM.

fault – n. responsibility for a problem, mistake, or bad situation

eligible – adj. able to do or receive something

according to – prep. as stated, reported, or recorded by someone or something

recipient(s) – n. a person who receives something

application(s) – n. a formal and usually written request for something

legislation – n. a law or set of laws made by a government

blow(n) away – p.v. to surprise someone in a very strong and favorable way

relatively – adv. when compared to others

step(ped) up – phrasal verb. to say openly or publicly that you are the person who should get something or who can do something