Large Animals Change the Land of a Former Military Base

Update Required To play the media you will need to either update your browser to a recent version or update your Flash plugin.
By John Russell
15 August 2020


Wild horses, bison and other large animals once moved freely in much of Europe. Now, these animals are changing a former military base outside of Prague, the Czech capital.

Where Soviet soldiers once held military exercises, large cattle called tauros now eat invasive plants that began growing on the property years ago. The animals are turning the former Milovice military base back into a kind of grassland or steppe. 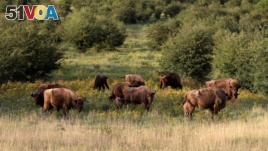 A herd of bisons graze on grass at a wildlife sanctuary in Milovice, Czech Republic, July 28, 2020. Wild horses, bison and other big-hoofed animals once roamed freely in much of Europe. (AP)

Five years ago, conservationists released the large animals at Milovice. The animals' job is to improve diversity among local plants. They do this by eating invasive plants while saving rare or endangered ones, said Dalibor Dostal, the director of European Wildlife, an organization supporting the project.

"Nobody expected that the whole process would go ahead so fast and the area would change so much in just a few years," Dostal said.

He added the large animals are as important to saving the grassland "as trees are for forests."

This year, conservationists hope to increase the size of the wildlife sanctuary by one-third to 360 hectares.

David Storch is a professor at Charles University in Prague. Storch, who was not involved in the project, described it as "absolutely unique."

He believes that it shows that nature can be saved not only by protecting it from human activities, but also by using large animals to shape the environment. While wild horses like to eat invasive grasses, European bison and tauros enjoy eating larger plants like bushes.

The Czech project includes tauros that came from the Netherlands. There, a special breeding program attempted to bring back a creature that was like the aurochs, which are the wild ancestor of modern cattle. Aurochs died out in the 17th century.

The project now has 25 tauros, about 70 wild horses, and 27 European bison.

The animals move freely. They can care for themselves, even in winter.

After the animals' release, the landscape quickly showed signs of change. Flowers started to appear as early as the second year of the project.

Today, the whole area changes colors over the course of the year, depending on which flowers are in bloom. One of the rarest is the star gentian, also known as a cross gentian. The blue flower is now growing at Milovice more than anywhere else in the Czech Republic.

Many other animals and insects are now plentiful at the former base. The Adonis blue butterfly has been seen there for the first time since 1967.

Miloslav Jirku, a biologist with the Czech Academy of Sciences, has been involved in the project from its beginning.

"If we give nature a chance, if we give it time and space, it can take care of many things," he said. "At the very beginning, I thought that lots of species that used to be here in the 1990s would have to be returned artificially. Today, a number of them are already here without us doing anything about it," he added.

Karel Janicek reported on this story for The Associated Press. John Russell adapted it for VOA Learning English. George Grow was the editor.

conservationist – n. someone who acts for the protection of wildlife or the environment

sanctuary – n. a place or safety

over the course – expression: during or throughout

bloom – v. to produce flowers; be in flower

artificially – adv. not natural or real; made, produced, or done to seem like something natural