Life as a Spy in Communist Romania

Update Required To play the media you will need to either update your browser to a recent version or update your Flash plugin.
By Susan Shand
09 August, 2018


Romanian secret police agents watched her and persuaded friends to report on her activities. The agents took pictures of her when she was in her underwear.

About 70 informants and spies watched Katherine Verdery when she visited Romania in the 1970s and 1980s. At the time, the country was under Communist Party rule.

Verdery went to Romania for postgraduate research on village life. She is now an anthropology professor at The Graduate Center of the City University of New York. 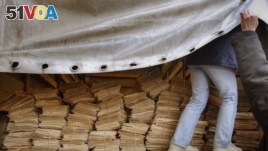 In this March 10, 2005, file photo, Romanian military staff prepare to unload files of Romania's former communist regime's Securitate secret police from a truck at the headquarters of the National Council for Studying the Securitate Archives (CNSAS) in Leordeni, Romania. Some 70 informants and spies secretly recorded the life of Katherine Verdery. (AP Photo/Vadim Ghirda, File)

After the collapse of communism in 1989, Verdery was given a copy of the once secret records about her activities. The documentation covered 2,781 pages. She used them for her book, which is called "My Life as a Spy."

Verdery wrote the book in English. It was recently published in the Romanian language, a move that has opened old wounds. Her story is forcing Romanians to face a dark period in their history.

Verdery admits being a young and innocent American when she first went to Eastern Europe. She failed to understand what her questions and efforts to become part of Romanian society looked like to other people.

Under Communist rule, Romanians considered Americans sent to Romania for study programs to be Western spies. Verdery did nothing to stop the idea. Once she mistakenly rode her motorcycle onto a military base.

By the end of her research, the officer responsible for her case decided she was not a spy.

When Verdery first learned of the existence of the secret police records, she was "absolutely stunned... I couldn't believe my eyes, the level of surveillance was so much greater than anything I had...imagined."

Romanian Securitate agents reported on her movements, sometimes up to 16 hours a day. Hotel employees reported where she went, others looked at her belongings to read her research notes. She was filmed and recorded everywhere and friends reported on her.

The secret police had a number of names for Verdery. They included "Vera," ″Vanesa" and "Folklorista."

Angry and sad, Verdery returned to Romania to understand why she had been a target for the secret police.

"(They assumed) that I was a spy," she told The Associated Press by telephone from Massachusetts. "Finding out my friends were involved working with the secret police...was an unwelcome surprise."

Back in Romania, she met and discussed events with former close friends and co-workers.

Some people denied watching her. Others had died. One woman blamed Verdery for making her become an informer. Only one person apologized. Verdery forgave everyone.

Verdery believes spying is a product of culture. She understands why people might think she was a spy. She took notes and kept copies. Later, she sent them to the United States, mail that was shipped directly from the U.S. embassy in Bucharest.

Verdery does not name the friends who spied on her, but records that have appeared in Romanian media show they included two former government ministers.

Memories of the Securitate

Unlike other former communist countries, Romania has yet to deal with the destructive effect its secret police had on the country. Everyone was watched. Nearly everyone was an informer. People lived without trust.

"It's as alive as it was before, and we haven't healed yet," said Armand Gosu, a teacher at the University of Bucharest.

But the publication of "My Life as a Spy" in Romanian last month seems to be having an effect. The book has sold out as Romanians seem prepared to discuss their past.

Silvia Colfescu heads the publishing house Vremea. Colfescu was one of Verdery's few friends who did not spy on her.

"She was a foreign researcher from America, of course, they had their eyes on her," Colfescu told The Associated Press. "All foreigners were naive, all of them," she said. "We had foreign friends and I told them."

Why did so many people spy on others? The secret police used threats.

"Your children won't get into university, your wife won't get cancer treatment," Colfescu said.

Armand Gosu calls the book "sensational." He said it is unusual that an American understands the time of Nicolae Ceausescu better than Romanians.

Alison Mutler reported this story for the Associated Press. Susan Shand adapted her story for VOA Learning English. George Grow was the editor.

surveillance – n. the act of watching someone very closely all the time

page – n. pieces of paper in a book or publication

postgraduate – adj. of or relating to studies done after one completes a study program at a college or university