Update Required To play the media you will need to either update your browser to a recent version or update your Flash plugin.
By Kelly Jean Kelly
07 August, 2018


In the U.S. this week, a number of technology companies banned controversial radio host Alex Jones from using their services. The companies say Jones violated their policies against hate speech. But Jones and his supporters claim the companies are violating his right to free speech.

The conflict between Jones and the social media companies raises an issue that others have long been discussing: Are social media services such as Facebook and YouTube public places where anybody can say anything? Or are they more like private television stations and newspapers, which control their content?

Who is Alex Jones?

Jones has a radio show called "The Alex Jones Show" and a website called "Infowars." He has claimed that officials in the U.S. government helped carry out the terrorist attacks on September 11, 2001, and that the 2012 shooting of 20 children and 6 adults at Sandy Hook Elementary School did not really happen.

The website Vox reports that as many as 10 million people visit Infowars every month, and 17 million people looked at his YouTube channel in the past 30 days.

Critics of Jones and his media say he gives his audience wrong information and promotes stories that lead to violence. They have objected to his descriptions of Muslims, transgender people, Jews and other groups.

Several people have brought lawsuits against him, including parents of a child who was killed at Sandy Hook. They and others say they have suffered threats and pressure because of Jones. 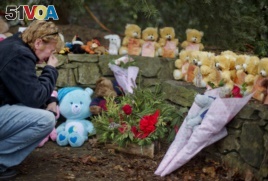 FILE - Cheryl Girardi, of Middletown, Conn., kneels beside 26 teddy bears, each representing a victim of the Sandy Hook Elementary School shooting, at a sidewalk memorial, Dec. 16, 2012, in Newtown, Conn.

So what should technology companies do?

In recent months, technology companies have struggled to draw a line about what content they will and will not accept. Facebook especially has made efforts to prevent people from creating accounts for people who do not exist, or from sharing information they know is wrong.

In the case of Alex Jones, Facebook did not say misleading information was the reason they banned the radio host. Instead, it said Jones' words on Infowars used "dehumanizing language" and violated their rules against promoting violence and hate.

Apple reportedly removed five of Infowars' six podcasts from iTunes for violating hate speech. The company told the Associated Press that it "does not tolerate hate speech" but did not name Jones or comment further.

Jones and his supporters have pushed back against the ban, saying the First Amendment of the U.S. Constitution protects his right to free speech. He warns against censorship, saying that technology companies and critics want to silence him because they do not like his point of view.

Even those who do not like Jones' ideas ask where the ban against him will lead. The president of the Media Research Center, Brent Bozell, wrote, "We are rapidly approaching a point where censorship of opposing voices is the norm. That's dangerous."

But others have pushed back against Jones' claim of First Amendment protection. A Muslim-American writer, Rafia Zakaria, says Jones' words are a kind of domestic terrorism and should be outlawed, just as support for international terrorism is.

Some First Amendment scholars make a different argument. They say laws have always restricted some speech, especially when it unfairly damages others. They say media figures cannot call their stories "opinion" and avoid responsibility for them.

Another observer offers yet a different idea. Media historian Brian Rosewald points out that technology companies are businesses, and they do not want to risk losing money because of someone the audience or advertisers do not like.

Kelly Jean Kelly wrote this story for Learning English based on reporting from the Associated Press and other outlets. Hai Do was the editor.

content - n. the ideas, facts, or images in a book, movies, aricles, websites...

audience - n. the people who watch, read or listen to something

promote - v. to help something happen, develop or increase

transgender - adj. of or relating to people who feel that their true nature does not match their sex at birth

misleading - adj. something that is not true

tolerate - v. to accept the feelings, behavior, or beliefs of someone

censorship - n. the system or practice examining and removing content

the norm - n. something that is usual or expected