US TikTok Users Prepare for Life without the App

Update Required To play the media you will need to either update your browser to a recent version or update your Flash plugin.
By Bryan Lynn
16 July 2020


American users of the popular video sharing service TikTok are preparing for a possible ban of the app by the U.S. government. U.S. lawmakers have warned the Chinese-owned TikTok could be misusing private user information. 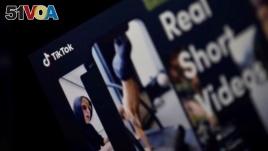 In this file photo, the logo of the TikTok application is seen on a screen in this picture illustration taken February 21, 2019. (REUTERS/Danish Siddiqui/Illustration)

China's ByteDance owns TikTok. The app is hugely popular in the United States and many other countries, especially among young people. TikTok only operates outside of mainland China and ByteDance runs a similar video-sharing service for inside China.

The service lets users create and share very short videos and provides helpful tools to do so. Videos often include popular songs from well-known artists and TikTok has helped launch the careers of new internet and music stars.

One of those users is 20-year-old Ty Gibson of Greensboro, North Carolina. Gibson said at first, he dismissed the reports suggesting the app might be banned. But then, a technical problem led him to believe a ban might be beginning. The problem, which was later fixed, made a video counting tool disappear.

"I thought it was the end," Gibson told Reuters news agency. "I didn't even have time to think things through." Gibson said he recorded a personal goodbye video for his 4.6 million fans, asking them to follow him on YouTube and Facebook's Instagram.

Another well-known TikTok user is professional gaming star Tyler Blevins, more widely known as Ninja. He has 4 million followers on TikTok. After recent reports about a possible ban, Blevins told his 6 million Twitter followers he had already removed TikTok from his phone.

Other TikTok fans are staying with the service for now. But some have expressed sadness through videos of themselves crying and dancing, while including hashtags about a possible ban. #TikTokBan has received more than 212 million views on the app, while #SaveTikTok got over 315 million.

Competing video sharing services like Triller, Byte and Dubsmash have watched downloads of their apps rise after Pompeo's comments. Some are now directly targeting TikTok users.

Triller, which became known for its heavy use of hip-hop music, is seeking to sign up top TikTok stars to join, said Ryan Kavanaugh, founder of Triller operator Proxima Media.

Taylor Cassidy, a TikTok influencer with 1.7 million followers, told Reuters some TikTok competitors had already contacted her and suggested she build up her presence on their apps.

Dylan Tate is an 18-year-old TikTok user from Greenville, South Carolina with 1.2 million followers. He has been urging other TikTok users to move to the Byte app in his recent videos. Tate says one big reason to move is that Byte gives 100 percent of ad earnings to video creators.

"I've been commenting on people's TikToks to tell them to go to Byte. Now people are doing it themselves," he told Reuters.

Reuters reported on this story. Bryan Lynn adapted the report for VOA Learning English. Hai Do was the editor.

hashtag – n. used on social media to describe the general subject of a tweet or other posted message

view – n. to see something from a particular place