What Can Happen in US Presidential Election

Update Required To play the media you will need to either update your browser to a recent version or update your Flash plugin.
By Hai Do
04 October 2020


Election Day is usually the end of the presidential campaign in the United States. This year, it could be just the beginning.

Republican and Democratic Party activists are preparing for possible legal fights over ballots, voting rights, and the process for seating the winner.

All of this comes as the country is dealing with the coronavirus health crisis, also known as COVID-19. The virus has infected more than seven million people nationwide. More than 200,000 have died from the disease.

The U.S. Constitution and federal law have established the following process to seat a president. It is a little more complex than simply giving the keys to the White House to the winner. 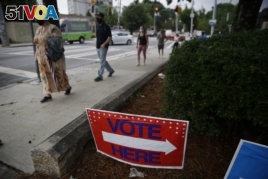 FILE - People wait in a line to vote in the Georgia's primary election at Park Tavern on Tuesday, June 9, 2020, in Atlanta. (AP Photo/Brynn Anderson)

Voters in all 50 states and the District of Columbia are not voting directly for the president. They are instead voting for a list of electors who promise to support one of the presidential candidates.

Citizens of U.S. territories including Puerto Rico, Guam and American Samoa cannot vote in the presidential election. But they can vote if their official residency is in one of the states or Washington, DC.

In some states, voters can vote in person or mail in absentee ballots before November 3. But the voting stops when voting stations close on election day. Then, states can begin counting the ballots.

Each state has its own deadline for confirming election results. However, legal action or other issues could delay the vote count.

December 8 is known as the safe harbor deadline. That is the deadline for states to choose electors who will vote for the winner of the presidential election. The U.S. Congress cannot question or challenge any electors named by this date.

This year, some people fear that delays from mail-in ballots and vote-counting disputes might not produce a winner in some states by the deadline.

Writing in The New Yorker, Jeffrey Toobin describes a possible conflict in four states: Michigan, North Carolina, Pennsylvania and Wisconsin. All four have Republican-controlled legislatures and the state governor is a Democrat. If the legislature was to appoint one list of electors, but the governor rejects it or sends a different list, what would happen? His answer is simply, "No one knows."

December 14 is the date when electors are required to meet and vote for president. This process is known as the Electoral College.

The Electoral College currently has 538 members. They will meet in each state and vote for the president and vice president. A majority of 270 electoral votes is required to elect the president.

There have been five winners of the Electoral College who actually lost the popular vote. They are John Quincy Adams in 1824; Rutherford B. Hayes in 1876; Benjamin Harrison in 1888; George W. Bush in 2000; and Donald J. Trump in 2016.

A copy of the official Electoral College results will go to the president of the Senate, who is also the U.S. Vice President by December 23.

Congress to confirm the winner

This has happened two times in U.S. history.

In 1824, the Electoral College votes were divided among four candidates. Andrew Jackson had 99 votes. John Quincy Adams came in second with 85. William Crawford received 41 and Henry Clay, the House Speaker, had 37. The House chose Adams over Jackson for president. And Adams named Clay as his Secretary of State.

On February 1, 1877, Congress met to count the electoral votes from the 1876 presidential election. Democrat Samuel Tilden had won the popular vote over Rutherford B. Hayes. But Tilden was one vote short of the 185 electoral votes needed to win.

The Democratic-controlled House and the Republican majority Senate met 15 times to decide on the winner. It finally awarded the disputed election to Hayes by one electoral vote.

The Constitution states that the president's term in office begins on January 20. The president is sworn-in by the middle of the day.

If Congress has yet to confirm a winner of the presidential election, federal law requires the nation to have an acting president. The Speaker of the House would then serve as Acting President under current presidential succession law.

residency - n. a period of time when someone lives in a place

absentee - adj. not being present

deadline - n. a date or time when something must be finished : the last day, hour, or minute that something will be accepted

submit - v. to leave to the judgment or approval of someone else