Update Required To play the media you will need to either update your browser to a recent version or update your Flash plugin.
By Christopher Cruise and Caty Weaver
2011-11-10

And we answer a question about American whiskey ...

But first, it is history at the movie theater where a new film opens about former law enforcement chief J. Edgar Hoover.

Have an e-reader? Download this story as a PDF

DOUG JOHNSON: The movie "J. Edgar" opens across America today. The film is about J. Edgar Hoover, the first director of the Federal Bureau of Investigation. Hoover was a complex and powerful man. He helped develop the FBI into an efficient and effective crime solving agency. However, in later years, many people questioned the methods used by Hoover and his investigators. Bob Doughty tells more about the man and the movie.

BOB DOUGHTY: Clint Eastwood directed the movie "J. Edgar." He grew up in the time when, in his words, "Hoover was always top cop." Eastwood said he had heard different stories about the former FBI director. Some of them were very critical. But Eastwood said anybody who stays in a job as long as Hoover did is going to create some enemies.

J. Edgar Hoover was the leader of the FBI and the agency it developed from for almost fifty years. He reported to eight different presidents during that time. He directed some of the most famous anti-crime operations in American history. These included the hunt for bank robbers like John Dillinger and Machine Gun Kelly in the nineteen thirties.

Hoover also targeted Communists and those he suspected of Communism. He believed that people should be investigated and tried for their political beliefs. He created a secret group within the FBI to get information about Communists and people suspected of Communism. The team sometimes used illegal methods to carry out their work. He also spied on major American officials, even the presidents he served.

J. Edgar Hoover's personal life was also mysterious. He was born in and spent his whole life in Washington, DC. He lived with his mother until she died when he was forty-three. He never married. There are reports he was a homosexual and involved with deputy FBI director Clyde Tolson. The two men were together a great deal of time even when they were not working. There are also reports that Hoover liked to dress in women's clothing.

Hoover became very angry at both these suggestions.

J. Edgar Hoover died of a heart attack in nineteen seventy-two. He was seventy-seven. The headquarters building of the Federal Bureau of Investigation is named for him.

Actor Leonardo DiCaprio stars as J. Edgar Hoover in the new film. He did a huge amount of research for the part. But, he told Hollywood Reporter magazine that Hoover remains mysterious to him. DiCaprio said he believed Hoover's mother was the guiding force of her son's life. British actress Judy Dench plays Annie Hoover in the movie.

Leonardo DiCaprio is thirty-six years old. But he portrays Hoover in all periods of his adult life. DiCaprio had to spend hours in the make-up chair each day to look the part.

J. EDGAR HOOVER (Leonardo DiCaprio): "I want you to start a file on Senator McKellar immediately. I want four agents on him at all times. I want to know what's in his trash and I want you to photograph him at every dinner. Don't get in the car. You can walk back."

CLYDE TOLSON (Armie Hammer): "Director, we have lunch. We don't miss lunch no matter what, remember?"

J. EDGAR HOOVER: "You pulled away from me in there."

To learn about American whiskey, we went straight to an expert: Charles Cowdery. He writes a blog and a newsletter on whiskey. And he wrote the book, "Bourbon, Straight: The Uncut and Unfiltered Story of American Whiskey." In Chicago, where Mister Cowdery lives, he offers classes about different whiskeys.

In his book, Mr. Cowdery told about the history of the American whiskey industry, how the drink is made and sold, and differences among forms of whiskey. He says American whiskey is made in America, which explains where the name came from. 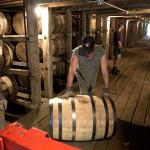 Workers move barrels of Jack Daniel's whiskey in one of the warehouses at the famous distillery in Lynchburg, Tennessee

Charles Cowdery says India and China are two of the countries where sales of American whiskey are growing fast.

CHARLES COWDERY: "It is desirable in these markets. American whiskey exports have gone from really the last twenty years, virtually zero, to now a billion dollar export product."

Even if Americans do not drink whiskey, many of them remember learning about the Whiskey Rebellion in school. The Whiskey Rebellion was an early test of the power of the national government. The nation's first president, George Washington, led troops to end a rebellion by opponents of a federal law.

The Whiskey Rebellion was a major test of the power for the new federal government after the war of independence ended in seventeen eighty-three. The new government agreed to pay the war debts of the individual states.

In seventeen ninety-one, Treasury Secretary Alexander Hamilton proposed a way the federal government could raise money to pay this debt. He proposed a tax on all alcoholic drinks sold in the country. Congress approved the tax and President Washington signed it into law.

By seventeen ninety-four, farmers in western Pennsylvania began openly protesting the tax. The civil protests became an armed rebellion. Local officials ordered the arrest of the leaders of the rebellion, but this just added to the violence.

President Washington personally led an army of more than twelve thousand troops into western Pennsylvania to stop the rebellion.

The conflict ended quickly. The government ended the tax in eighteen-oh-two.

DOUG JOHNSON: Two thousand eleven has been a great year for singer Scotty McCreery. In May, he won the tenth season of "American Idol," the popular television singing competition. Then, less than six months later McCreery released his first album. Shirley Griffith has our story and music from his new record "Clear as Day."

SHIRLEY GRIFFITH: Scotty McCreery is only eighteen years old. That is why "American Idol" judges were surprised by his deep bass voice. The depth and control McCreery has usually comes later in adult life. Listen as he sings "Out of Summertime" from the album "Clear as Day."

Scotty McCreery won the 10th season of "American Idol" in May

Scotty McCreery says his album includes songs that have an older country music style. The North Carolina native says he grew up listening to and loving the artists who performed that kind of music including, Hank Williams, Merle Haggard and Johnny Cash. Some of his work is also representative of his Christian beliefs. Like the song, "That Old King James."

Scotty McCreery received a recording agreement and two hundred fifty thousand dollars from his "American Idol" win. His album "Clear as Day" entered Billboard's top two hundred albums chart at number one. McCreery is the youngest artist to do that. We leave you with him performing the song "Clear as Day" from his new album.

DOUG JOHNSON: I'm Doug Johnson. Our program was written by Christopher Cruise and Caty Weaver, who was also our producer.

If you have a question about American life, send it to mosaic@voanews.com.Join us again next week for music and more on AMERICAN MOSAIC in VOA Special English.
Related Articles
go top