How High Will the Price of Oil Go This Time?

Update Required To play the media you will need to either update your browser to a recent version or update your Flash plugin.
By Mario Ritter
2011-3-10 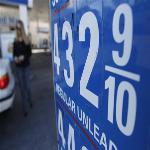 Unrest in North Africa and the Middle East has pushed oil prices back into the news. Prices have been rising at their fastest level since two thousand eight.

Libya is not among the ten largest oil exporters. But the rebellion against Libyan leader Moammar Gadhafi has reduced production, affecting the global market.

The price of oil affects prices and demand for energy, plastics, farm chemicals and many other products made with petroleum.

During the last week of February, Americans paid the second biggest weekly increase in gasoline prices in twenty years. This young woman has to drive a long way to school, so high gas prices mean less money for other things.

WOMAN: "I am a college student and I have to drive forty-five minutes to college, so it sucks."

The United States has a Strategic Petroleum Reserve that contains more than seven hundred million barrels of oil. President Obama could use some of this emergency supply to help ease fuel prices. But intervening in the market could hurt oil production in the United States.

Oil prices have been rising at a bad time, just as many economies have been recovering from the global recession. Also, several countries in the euro area are still struggling with debt crises.

In the United States, higher fuel prices come just as General Motors and Chrysler show signs of recovery after their reorganizations.

GEORGE MAGLIANO: "With gasoline prices higher, certain people might want to get a much more fuel-efficient vehicle and I don't mean even a hybrid or an electric vehicle which they could do, but the gasoline vehicles get twenty-five, thirty percent better mileage today than they did three or four years ago."

And that's the VOA Special English Economics Report, written by Mario Ritter. Share your stories about what high fuel prices mean to you at 51voa.com or on Facebook at VOA Learning English. I'm Steve Ember.