Update Required To play the media you will need to either update your browser to a recent version or update your Flash plugin.
By Faiza Elmasry
2011-10-26 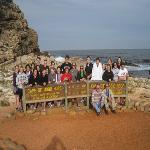 Photo: UGA
A study-abroad group in South Africa, with Professor William Finlay from the University of Georgia seated at right

This is the VOA Special English EDUCATION REPORT.

Each year about two hundred fifty thousand Americans study in other countries. Some study-abroad programs are trying harder to get students to learn about the local culture. One student on his first morning in Beijing was brought to a distant part of the city. He received money and instructions how to get back. It took some time but he succeeded.

William Finlay heads the sociology department at the University of Georgia in the United States. He says challenges like this help students experience another culture.

WILLIAM FINLAY: "It's absolutely crucial that they know something about how people in other parts of the world live and think and how they behave. Often those students go in large groups and they hang around with each other. We felt that they really weren't getting to know the local inhabitants."

WILLIAM FINLAY: "We've been working with a particular NGO in the township and they do two things: they run a number of these creches, which are basically day care centers for children whose parents are working, and the library in the community where there are some computers. Our students typically work either with the little kids in the day cares or they work in the library and teach very basic computer skills to mostly young adults."

HILLARY KINSEY: "It was interesting to learn the history of the area and the recent development with democracy and that sort of thing, and then talk to these people and see what the social dynamics were, what the ethnic divisions were, how certain groups felt about other groups."

When Ms. Kinsey returned from South Africa recently, she and other students in the program created a nonprofit organization.

HILLARY KINSEY: "We called it Ubunto, which is a South African concept coined by Desmond Tutu, and it means 'I am because we are.' The idea is kind of based around relationships within society and what generates prosperity for the whole. And so we kind of took that notion and translate into a larger international community."

She says the goal is to help improve education and development in South Africa.

Mark Lenhart is the executive director of CET Academic Programs. Each year, that company places more than one thousand students in semester and summer study programs. The programs are in China, Jordan, the Czech Republic and other countries.

MARK LENHART: "In all of our locations, we place students with local roommates."

Students gain from that, he says, but the experience is not always easy.

MARK LENHART: "Not just in terms of language learning, but they also find the local culture can present challenges, and perhaps misunderstandings. They have to adjust to local life. It's no longer OK just to have a little Chinese, for instance. If a student is studying Chinese, they want to come home from a program like this fluent in Chinese. And so this will enable students to become more employable when they graduate."

And that's the VOA Special English Education Report. Have you ever studied in another country? Tell us about it at 51voa.com or on Facebook and Twitter at VOA Learning English. I'm Christopher Cruise.