Update Required To play the media you will need to either update your browser to a recent version or update your Flash plugin.
By VOA
2011-9-28 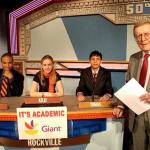 "It's Academic" is a Saturday morning program for high school students. The show has aired in the Washington area for fifty years. Secretary of State Hillary Clinton competed on the show when she was a teenager.

MAC McGARRY: "You should take a looooong look at these questions because all the clues contain the word long. Identify the following, number one: the 'Long Gray Line' refers to cadets at this US military academy. [Bell] Macgruder."

MAC McGARRY: "Right. He didn't live to see the staging of his drama 'Long Day's Journey Into Night.' [Bell] Magruder."

Susan Altman is the producer.

SUSAN ALTMAN: "It's a great age group to work with. They're fun, they're enthusiastic, they say funny things without even meaning to half the time."

Ms. Altman's mother, Sophie, was a TV producer in the nineteen fifties. She started "It's Academic" after local school officials asked her to create a program that showed outstanding students.

SUSAN ALTMAN: "At that time -- nineteen sixty-one -- the United States was going through a lot of upheaval with school integration, and they wanted things to help out to make the schools look good and to show that integration could work and work well. So this is what she came up with."

Mac McGarry is eighty-four and has hosted "It's Academic" since the beginning.

MAC MCGARRY: "Every time I look up, I see people who are just seventeen years old, and somehow I think, well, I must not be growing older at all. Their enthusiasm is contagious, no question about it. You really have to rev yourself up to keep up with them."

More than twenty thousand students have appeared on the show. Mac McGarry has asked more than two hundred thousand questions and gotten more than a few funny answers.

MAC McGARRY: "We had a question one time: 'Who defeated Napoleon at Waterloo?' and the young fellow answered Duke Ellington. Another time, we had a question of 'Who along with Frederick Engels wrote the Communist Manifesto?' Groucho Marx!"

The correct answers, of course, are the Duke of Wellington and Karl Marx. Kelly Reeder knows that. She led the team from Rockville High School in Maryland last year. Her school has won the championship on "It's Academic" several times.

KELLY REEDER: "Me and all the other people on the team, we've put in a lot of effort over the years and a lot of time to be where we are. It's a really huge honor to end up on the A Team."

And what do other students think?

And that's the VOA Special English Education Report. You can find a link to a video about "It's Academic" at 51voa.com. I'm Christopher Cruise.