A Restaurant for Man’s Best Friend

Update Required To play the media you will need to either update your browser to a recent version or update your Flash plugin.
By Faith Pirlo
05 November 2022


The city of San Francisco, California, is known as a city for people who love food, or "foodies." There are many of award-winning restaurants.

San Franciscans also love dogs. So, dog owner and chef Rahmi Massarweh decided to combine his two loves into one. He has opened the first and only restaurant for dogs.

The restaurant is called Dogue. The name is like the word "vogue," which means "fashion." It opened in September in the city's popular Mission District. 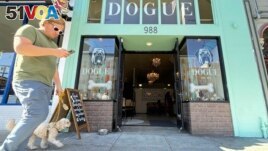 Individual dishes cost around $30. Or, for $75 dollars each, dogs can dine on a multi-course "bone appetite" meal. The special meal includes chicken skin waffles and raw steak with a quail egg. The price also includes a baked good and an alcoholic drink for the dog's owner.

Massarweh left his job of running a fine dining restaurant to open his Dogue.

Some people are expressing their opinions about the costly menu. They are noting some of the city's issues, including income inequality, homelessness, and gentrification. Gentrification is the process of changing a place by making it more appealing to wealthier people.

But Massarweh has received a lot of support from his customers. They are thankful to have a place to treat their furry friend. Recently, Dogue held three dog birthday parties at the same time.

Gledy Espinoza is the owner of Mason. He is an 11-year-old miniature dachshund. Mason enjoyed some mushroom soup with pieces of chicken.

"I wanted to celebrate him. He is so special to me. He's my four-legged child and this is the perfect place to do a really nice celebration. We're foodies. I guess he is too, now," Espinoza said.

Massarweh uses costly ingredients to prepare his food. Everything he makes could be eaten safely by humans, but we probably would not like it. The dog dishes may taste very bland, or flavorless, to us.

Dogue's goal is to spread the idea of feeding dogs fresh, healthy, and natural food. Some research shows that natural food may be better for a dog's stomach than the dog food that you can buy in a store.

Massarweh said he enjoys seeing the joy that Dogue brings to its customers.

"I've worked in restaurants for many years, and it's rare when as a chef, I walk into the dining room...and every single guest has a smile on their face," he said. "There's something very unique and satisfying about that."

Haven Daley wrote this article for The Associated Press. Faith Pirlo adapted it for Learning English.

fashion – n. the area of activity that involves styles of clothing and appearance

waffles – n. a crisp cake of batter baked in a waffle iron often eaten for breakfast

raw – adj. in the natural state or uncooked

dachshund – n. a type of dog that has a long body but short legs, and are also known as wiener dogs