Update Required To play the media you will need to either update your browser to a recent version or update your Flash plugin.
By Hai Do
04 November 2022


In recent weeks, climate activists have thrown tomato soup, spread potatoes, and even attached themselves to famous paintings.

The activists have said their actions were meant to call attention to the burning of fossil fuels and the environmental crisis worldwide. 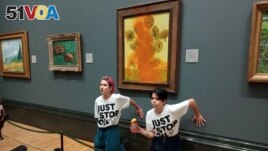 Activists of "Just Stop Oil" glue their hands to the wall after throwing soup at a van Gogh's "Sunflowers" painting at the National Gallery in London, Britain, Oct. 14, 2022. (Just Stop Oil/Handout via Reuters)

Weeks later, two other climate activists spread potatoes on a glass-covered painting by French Painter Claude Monet inside a German museum. Another activist attached his head to the glass covering of a famous Johannes Vermeer painting, Girl with a Pearl Earring, at The Hague in Amsterdam.

In a video widely seen online, the man who glued his head to Vermeer's painting asked, "How do you feel when you see something beautiful and priceless apparently being destroyed before your eyes?" He added, "Where is that feeling when you see the planet being destroyed?"

The actions followed a recent incident in which activists threw cake at the Mona Lisa in the Louvre. Activists also glued themselves to a copy of Leonardo da Vinci's The Last Supper at London's Royal Academy of Arts, Sandro Botticelli's Primavera at the Uffizi Gallery in Florence, Italy, and a sculpture at the Vatican.

Alex De Koning is a spokesman for Just Stop Oil, the group responsible for throwing cans of soup at Van Gogh's painting. He said the group will attack paintings and art "until the government makes a meaningful statement about ending new fossil fuel assets in the UK."

He told Euronews: "There are still people who are way more outraged about that action than the 33 million people in Pakistan being displaced by floods."

But University of Pennsylvania climate scientist Michael Mann said he worries the actions will hurt the activists' cause. He told the Associated Press that such actions will alienate people who are "natural allies in the climate battle." Some of those people, Mann said, "will draw negative associations with climate advocacy and activism from such acts."

Dana Fisher is a social scientist at the University of Maryland. She said the activists seemed to have targeted paintings that have a glass cover to cause less damage. She told the AP: "These tactics are specifically geared toward getting media attention."

In 1914, a supporter of women's voting rights cut The Toilet of Venus, a famous painting by Spanish artist Diego Velazquez in London's National Gallery.

During the Vietnam War, an Iranian artist sprayed the words "Kill Lies All" on Pablo Picasso's anti-war painting Guernica at New York's Museum of Modern Art.

The most famous painting of all, Mona Lisa, has been attacked more than any other work of art. People have thrown rocks, chemicals, paint and even a teacup at da Vinci's painting over the years. The Louvre has since put Mona Lisa behind bulletproof glass and kept visitors some distance away.

Following the attack on Girl with a Pearl Earring, a Dutch cultural official said, "Everyone has the right to make a point. But please: leave our shared heritage alone. Attacking defenseless works of art is not the right way."

Hai Do wrote this story for Learning English with additional reporting from The Associated Press and ArtNews.

glue - v. to attach something by using a sticky substance

can - n. a closed metal container that holds food or drink

alienate - v. to cause someone to stop being friendly

tactic - n. action that is planned to achieve a goal

heritage - n. traditions, achievements, .. that are part of history