Update Required To play the media you will need to either update your browser to a recent version or update your Flash plugin.
By Marsha James
23 March, 2016


Many young Americans dream of becoming a dancer for a prestigious ballet school. That dream is now a reality for 15-year- old Harper Ortlieb.

Harper Ortlieb left her small town in Oregon to move to Moscow. She is following her dream of becoming a prima ballerina. She was accepted for study at the Bolshoi Ballet Academy.

There are 721 students in the academy and only 84 of them are foreigners. Harper is younger than most. She is also among the few to be integrated into the regular Russian program. 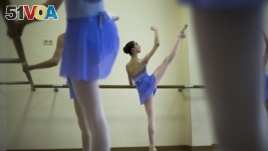 Harper Ortlieb, from Mount Hood, Oregon, performs in a ballet class at the Bolshoi Ballet Academy in Moscow, Russia, March 3, 2016.

Tatyana Galtseva is a teacher at the Bolshoi Ballet Academy. She says Harper is very gifted.

"She is very gifted," said Galtseva . "She is all ballet, all inspiration."

The Bolshoi took notice of Harper when she took part in a Bolshoi summer program held in Connecticut. The Bolshoi then offered her a place in its Moscow school.

Harper says she feels accepted by her classmates and teachers. But, she says the experience has been harder than she expected.

"It's been very difficult, but with that comes strength and with that I improve,'' she said. "I feel like I came here to get better, to improve, not only technically but emotionally so when I dance people see something."

Layne Baumann and Tim Ortlieb are Harper's parents. In September, they left their only child in Moscow. In February, Harper's mother decided to move to the Russian capital for at least the rest of the school year. She lives about two blocks from the ballet school.

Seventeen Americans study at the Bolshoi Academy. There are 28 students from Japan. The other foreign students represent 22 different countries.

Harper's teacher believes the student has what it takes to be a classical ballerina.

She says, "She is extraordinarily attentive. She is always smiling. Such a sweet, wonderful girl.''

Harper hopes to become one of the rare foreigners to receive a diploma from the Bolshoi Ballet Academy. She has three difficult years ahead to reach her goal.

Associated Press reported on this story. Marsha James adapted this story for Learning English. Caty Weaver was the editor.

academy – n. a school that provides training in special subjects or skills

integrated – adj. allowing all types of people to participate or be included

inspiration – n. something that makes someone want to do something or that gives someone an idea about what to do or create

classical – adj. of a kind that has been respected for a long time