Update Required To play the media you will need to either update your browser to a recent version or update your Flash plugin.
By Christopher Jones-Cruise
20 May, 2017


Amnesty International has launched a campaign to publicize what it says is a worsening situation for human rights activists throughout the world.

The group hopes its "Brave" campaign will persuade governments to keep the promises they made in United Nations treaties to protect defenders of human rights.

The organization Front Line Defenders says 281 people were killed in 2016 for defending human rights. In 2015, the number was 156.

"In the current context of us-versus-them, of demonization, of full frontal attack actually I would say on human rights, it is crucial that we take stock and that we call on the authorities to stop these attacks immediately."

Amnesty says the bad treatment of human rights activists in Russia is increasing. 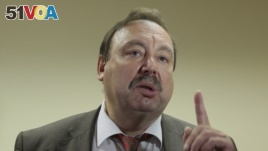 Gudkov said the state provokes us and drives us into a stronger resistance. They show that the law in Russia is worth nothing.

Guadalupe Marengo says other countries are following the lead of Russia in their treatment of activists.

"Only in the last week or so, Hungary is trying to have a bill similar to the one that Russia has, where it's going to be very difficult to form associations and fight for human rights if you're getting funding from external sources."

Activists have accused Turkey of failing to respect human rights after the failed attempt to overthrow the government last year. Tens of thousands of people have been arrested or dismissed from their jobs. Turkey claims they are part of a large anti-government plot.

Amnesty says human rights defenders are arrested, kidnapped and killed around the world. It says they are also attacked using online technology. Surveillance tools are used to study their activity.

Marengo says campaigns launched on social media tell lies about the activists in an attempt to cause others to oppose them.

Henry Ridgwell reported this story from London for VOA News. Christopher Jones-Cruise adapted his report for Learning English. George Grow was the editor.

demonization – n. the act of saying someone (or something) causes a lot of trouble

frontal – adj. of or relating to the front of something

take stock – expression. to study or examine something before making a decision

association – n. a group of people who share a common interest

online – adj. of or relating to a computer or telecommunications technology

surveillance – n. close watch over someone or something