Update Required To play the media you will need to either update your browser to a recent version or update your Flash plugin.
By John Russell
10 August, 2019


Astronomers have created the most correct map yet of the Milky Way – the part of space that contains our sun, solar system and more than 100 billion stars. Researchers made the three-dimensional map by measuring the distance from the sun to thousands of big, brightly shining stars.

They found that the shape of the Milky Way is not flat, but twisted. It is made of four major spiral arms and a bar-shaped main area. Their findings were published in the journal Science. 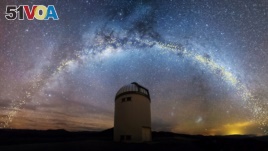 The warped shape of the stellar disk of the Milky Way is seen over the Warsaw University Telescope at Las Campanas Observatory, Chile, in an artist's rendition, Aug. 1, 2019. (Jan Skowron/University of Warsaw)

Andrzej Udalski is an astronomer at the University of Warsaw and a co-author of the study. He said that, for the first time, our whole galaxy was mapped from edge to edge using real distances.

Until now, the understanding of the galaxy's shape had been based on indirect measurements.

For the new map, researchers measured the distance from the sun to some 2,400 stars spread throughout the galaxy. The stars are called "Cepheid variables."

Dorota Skowron is also a University of Warsaw astronomer and a co-author of the study. Skowron explained that Cepheids are giant stars that are far brighter than the sun. They are also "relatively young" – less than 400 million years old. This means that they are located near their birthplaces.

The astronomers studied the Cepheids using the Warsaw Telescope located in the Chilean Andes. Because the stars pulsate at regular times, researchers could see them through the galaxy's clouds of dust.

The final map showed that the galaxy's shape changes from place to place. It becomes increasingly thick as it moves away from the center.

Researchers also found that the galaxy's disk has a diameter of about 140,000 light years. Each light year is about 9 trillion kilometers.

Will Dunham reported on this story for Reuters. John Russell adapted it for Learning English. Kelly Jean Kelly was the editor.

three-dimensional - adj. having or seeming to have length, width, and depth

twisted - adj. to bent or turned; changing its shape

spiral - n. a circular curving line that goes around a central point while getting closer to or farther away from it

galaxy - n. any one of the very large groups of stars that make up the universe