Update Required To play the media you will need to either update your browser to a recent version or update your Flash plugin.
By Bryan Lynn
07 August, 2019

Other automakers are also developing solar charging systems as a way to help power electric cars and increase driving distances between charges.

In an announcement last week, Hyundai said its system is available on the new Sonata Hybrid model, currently for sale in South Korea. A hybrid is a vehicle that can be powered by both electricity and liquid fuel, like gasoline.

The Sonata Hybrid has a structure of solar panels built into the top of the car. The system captures energy from the sun to help charge the vehicle's battery. Charging can take place when the car is parked or as the user drives it.

The energy captured by the panels is converted by a controller into electricity that can be stored in the battery. 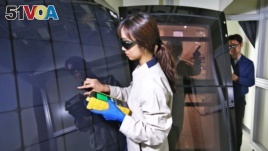 Hyundai says the technology can capture enough solar energy to charge 30 to 60 percent of the vehicle's battery. The company estimates that with six hours of daily charging, the system could increase a driver's yearly travel distance by 1,300 kilometers.

Other electric and hybrid vehicles need to be attached to electrical outlets in order to recharge. Charging times differ widely depending on the vehicle and the kind of electrical equipment used. Manufacturers have long sought to increase the distance a car can drive before requiring a battery charge.

Hyundai said in its announcement the next market for the solar-roof Sonata model will be North America, where the vehicle will be available "soon." The company says it plans to add the technology to several other models in the coming years.

Another automaker that has been developing solar charging technology for several years is Japan's Toyota. Last month, the company announced it had launched road testing of vehicles equipped with solar panels. The panels were attached to the roof and other parts of Toyota's Prius PHV model for the testing, which will take place on the streets of Tokyo.

Toyota says its system being tested is designed to charge the vehicle's battery whether the car is parked or driving. Information collected during the tests will be used to develop a new solar recharging system, the company said in a statement.

Toyota said the goal of its development and testing is to help create "a new solar battery panel market." Such a market could be an important step to help solve the world's energy and environmental problems, the company added.

U.S.-based Karma Automotive gave its Revero model a solar panel roof. The company says owners of the vehicle can expect to drive 800 to 1,600 kilometers per year on energy from the sun.

Germany-based Sono Motors says its solar cell-equipped electric Sion model could add an extra 34 kilometers of driving each day through power from the sun. The company plans to begin production next year in Sweden. It says at least 10,000 people have placed reservations to get a Sion, which the company's website says sells for about $28,600.

In the Netherlands, a company called Lightyear says it plans to start manufacturing its Lightyear One model by 2021. The company describes its electric vehicle with solar charging abilities as "the first long-range solar car today."

Solar panels are included on the vehicle's roof and front hood. Lightyear says drivers of the car could travel up to 20,000 kilometers a year on solar energy, depending on climate conditions. The Lightyear One currently has a reservation price of $134,000.

Bryan Lynn wrote this story for VOA Learning English, based on reports from Hyundai, Toyota and Sono Motors and Lightyear. Caty Weaver was the editor.

solar – n. related to the sun

panel – n. piece of equipment that attaches to the surface of something

battery – n. device that produces and can store electricity

park – v. leave a vehicle in a particular place for a period of time

convert – v. change the appearance, form or purpose of something

reservation – n. an arrangement made with a business to have a product or service saved for you

hood – n. a metal piece that covers a car's engine