Update Required To play the media you will need to either update your browser to a recent version or update your Flash plugin.
By Marsha James
07 December, 2016


"I love to create. I'm very visual person and I love to paint. I love to express myself in doing makeup, special effects, body paintings. I feel like I haven't worked a day in my life. It seems like I love to do everything that doesn't involve a job from 9 to 5 but by the end of the day I end up working so many more hours but doing what I love. "

That is Athena Zhe, artist. Her canvas is the human body on which she paints beautiful images. Zhe is also owner of Athena Entertainment. The company provides performances and performers for all kinds of parties and other events. Body art creation is among the possibilities.

Athena Zhe was born and raised in Ukraine. Her parents wanted her to become a lawyer or a doctor. But she always knew she wanted to paint. She also realized early in life a career in painting would not be possible if she stayed in her country.

Even though I was painting my whole life and it was my passion but it was only a hobby and I never really took it to the next level because back in the country that I came from all the artists were starving artist. So I know for some reason I never considered art as a career because I would never in a million years wouldn't be able to make money and be successful at it."

So, Athena Zhe came to the United States. She was clear on her goal.

"I came here when I was 14 years old to pursue an American dream." 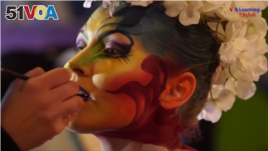 Athena first worked at a health food store. She began to paint on the store's menu boards. A customer praised her skill and asked if she would help paint faces at street fairs. Athena says it was a good start.

"I was doing it for about a year or two and I'm the type of person that always like to take it to the next level. Like OK what's next, what's next? I'm already done with facepainting, now what? And I went to FABAIC, its face and face and body art convention in Florida many years ago, and I saw that people were doing body painting and I'm like oh my god this is so exciting and so much better than just face painting because now I can do my all my art with the body painting as well.

"With body, you work with the human factor and it's not only you, paints and canvas it's you, paint, canvas and the person behind that canvas. When I pick up a brush it almost like I'm getting into my own zone in my own new world my comfort zone. Very often my models try to talk to me throughout the process, but it's so hard for me to even keep up a conversation because I'm so focused about what I'm doing and I'm so inspired that it totally takes me like out of this world it's almost like a drug.

When I paint like very often I can't stop. That's why doing body paintings actually been great for me because I know that I have to start to stop at some point because I'm painting on a human and obviously the model can't stand still for three or four days. But I can definitely paint for three or four days nonstop if I'm in creative mode." 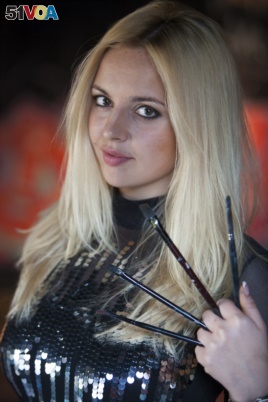 Zhe considers the body shape of her models as well as their skin colors. She says the most important part of her work is how it makes the person feel.

"When I'm doing a body painting, my goal is not only to create a beautiful piece of artwork, but also very important to make the model feel beautiful, because if the model will feel beautiful with your art work no matter how horrendous your body painting can be, she will rock it and it makes me feel accomplished and happy when I see that the model, my human canvas, is happy with the artwork I created on her."

Bodypainting is a much bigger project than face painting. Zhe says it takes 15 to 20 minutes painting a face. A body can take as long as 10 hours to paint, depending on how detailed it is.

She has won many awards for her paintings. Her work also has been featured in music videos, publications and on national television.

Zhe says she is often inspired by nature, fashion and the world around her when creating her art.

And she is passionate about what she does. She says she believes passion should be everyone's professional guide.

"If you want to be an artist or an actor or a scientist you should do exactly that. Follow your passion and do what you love. Don't be afraid to start an industry that maybe some of your friends didn't succeed in because if you gonna love what you do, you will never work a day of your life and you will be so great at it, that you will be remembered and even to be a great example to the rest of the world about that particular art or field that he will choose."

special effects – n. an image or sound that is created in television, radio, or movies to represent something real (such as an explosion) or imaginary (such as a monster)

notepad – n. sheets of paper that are attached at one end and used for writing notes

doodle – v. to draw something without thinking about what you are doing

installation – n. a work of art that usually has several parts (such as a sculpture, lights, and sound) and that is usually shown in a large space

mode – n. a specified way of thinking, feeling, or acting

About People in America

Artists. Public servants. Immigrants. Philosophers. Innovators. One who stuttered is now a public speaker. Another paints a canvas that breathes and moves. This is the new look of "People in America" -- a VOA Learning English video series that updates our earlier historical biographies.

Our People in America (PIA) tells the stories of living Americans from all corners of the globe. They might surprise you with their thoughts and philosophies. And how they personify democracy, self-sufficiency, expression and community.

With each PIA we offer a fun way to test what you have learned. Try our multiple-choice quiz or interactive graphics. Practice to see how well you understood what you viewed. Follow along with our reading and listening material. Return to the video and watch it again.