Update Required To play the media you will need to either update your browser to a recent version or update your Flash plugin.
By Marsha James
10 November, 2016


Each year on November 11th, Americans observe Veterans Day. Veterans Day honors men and women who serve, or have served, in the United States military.

But who serves them? Melissa Fitzgerald, for one.

The former Hollywood actress is senior director of the nonprofit organization, Justice for Vets. The organization is a part of the National Association of Drug Court Professionals, NADCP. She says what inspires her to serve is a quote by Dr. Martin Luther King Jr.

"There's a quote that has inspired me for many years, and my old friends will know it is the Martin Luther King Jr. quote, which is, everybody can be great because everybody can serve."

Justice for Vets helps to grow the number of veterans treatment courts and to expand their role. These courts were created to meet the specific needs of veterans involved in the criminal justice system.

Many veterans return from combat with mental health problems related to their service. Some suffer post-traumatic stress disorder, PTSD. Some abuse drugs. These difficulties can lead to unemployment, homelessness and arrest. The veterans treatment courts help soldiers find solutions to break the cycle of drug abuse and crime. 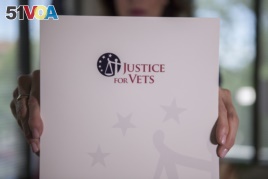 Melissa Fitzgerald knows that every veteran's journey back into civilian life after active duty military life is not the same.

"The vast majority of our veterans are returning home as leaders in our communities. They're living incredibly productive lives and they are truly civic assets. Some of our veterans are struggling and when they come home and they are struggling and they get in trouble with the law because of a substance use disorder, mental health condition or trauma and our mission at Justice for Vets is to put a veterans treatment court within reach of every veteran in need so they can receive treatment instead of incarceration."

Fitzgerald has visited many veterans in courts across the country. She says the programs are very rigorous and are part of the court system.

"You know it's an interdisciplinary court team that includes a judge, prosecutor, defense, probation, mental health care providers, among others. That they work together as a team and they are specially trained by us (because we do training and technical assistance) to assess and treat the veterans who appear before them. The first veterans treatment court that I went to visit, it was a miracle to me. It was miraculous to see a judge speaking with the veteran who's appearing before him and thanking him for his service and saying we're here to make sure that you succeed. And we are all grateful for your service to this country. And seeing, you know, certainly I've seen many veterans stand a little taller."

Not only are the veterans treatment courts effective, Melissa says, they are also places of hope and healing.

"And it is amazing to support the work that's going on there because it's remarkable. And on top of that, veterans treatment courts are effective. And they are returning healthy veterans to our communities. And you know, I think one of the things that I that really struck me when I have visited the courts around the country is that all of our veterans, including the ones who are struggling, are of our nation's greatest and most valuable civic assets."

Sgt. Tommy Rieman is one of those assets.

"He served in Iraq. He was shot several times – 11 shrapnel wounds. He used his body as a human shield to protect his men. He refused to be carried off until everyone else was and he returned home as, obviously, a hero. President Bush acknowledged Tommy in the State of the Union address and the entire time Tommy was struggling with post-traumatic stress disorder. His family life fell apart. His wife left with the children. After a night of heavy drinking and pills, he drove his truck into a tree and survived."

Melissa Fitzgerald remembers Tommy's story well. She says if it had not been for the NADCP, life would have been different for him.

"And this was right before I started, Justice for Vets had been advocating with the governor in North Carolina to open a veterans treatment court and during this time, a veterans treatment court opened in North Carolina. The first one in Harnett County, which was several hours from where Tommy lived. And in that program Tommy received the accountability, the treatment, the structure, a mentor and he was able to get his life back."

Melissa Fitzgerald left her life in Hollywood behind to come work for Justice for Vets. For years, she played the character of Carol Fitzpatrick on the hit TV show, "The West Wing."

But Melissa has always helped people in need. Melissa is co-founder of the nonprofit group Voices in Harmony. The organization uses the theater arts to mentor at-risk teens.

"I started Voices in Harmony in 1995 with several other actors and we kept working on that program as volunteers while we were still having our acting careers and we were struggling like crazy as actors, but Voices in Harmony was flourishing. And we just kept getting inspired to do more and more and, you know, then I got "The West Wing" and continued to do Voices in Harmony through that entire time."

In 2007, Melissa traveled to Africa with several others to be of service.

"During "The West Wing" you have a good chunk of time off in the summer. So I, one summer, went to South Africa and volunteered and, as a result, had the opportunity to go somewhere else, too, through international medical corps. And I chose to go to Northern Uganda because I'd been working with teens and there was a child soldier issue where children were being abducted by the Lord's Resistance Army there. And I think that experience really opened my eyes to the effects of war on communities. I get emotional thinking about it, but that really inspired me to feel like we actually have the ability to make change. All of us do if we work together."

Melissa also helped produce the documentary film, "Halfway Home." The film features U.S. veterans from wars in Iraq, Afghanistan and Vietnam. The soldiers recount their experiences in war and in their transitions to civilian life.

There are approximately 23.2 million military veterans in the United States. They are the ones who have fought, sacrifice and served this country. Now, Melissa Fitzgerald says we all owe them everything.

"I think our country owes our military veterans to embrace them when they come home, be there for them with the programs that work for them and for their families. A lesson that I learned in acting is when you want to know who your character is when you're reading a new script or a new play, what do you do? Do you look at what they say, that's one way. Do you look at what other people say about them? That's another way and maybe even a better way than what they say. But the real way you know who your character is is what do they do. So I think that's very true about life. And I think that if we say and use the words that we honor our veterans, thank you for your service and we are a grateful nation, those must be backed up by actions, real actions. And I think real actions are supporting programs that work. And that's why I feel like Justice for Vets and the work that we are doing in veterans treatment courts is important, powerful, necessary and essential to really expressing our true gratitude. Because I do feel like the American people are grateful for the service of our veterans."

Next time on People in America, meet Evan Lutz, CEO and Co-founder of Hungry Harvest.

nonprofit – adj. not existing or done for the purpose of making money

quote – v. to write or say the exact words of someone

civilian life – exp. life after one gets out of the military or armed services

incarceration – v. to put someone in prison

flourish – v. to be very successful: to do very well

About People in America

Artists. Public servants. Immigrants. Philosophers. Innovators. One who stuttered is now a public speaker. Another paints a canvas that breathes and moves. This is the new look of "People in America" -- a VOA Learning English video series that updates our earlier historical biographies.

Our People in America (PIA) tells the stories of living Americans from all corners of the globe. They might surprise you with their thoughts and philosophies. And how they personify democracy, self-sufficiency, expression and community.

With each PIA we offer a fun way to test what you have learned. Try our multiple-choice quiz or interactive graphics. Practice to see how well you understood what you viewed. Follow along with our reading and listening material. Return to the video and watch it again.