Update Required To play the media you will need to either update your browser to a recent version or update your Flash plugin.
By Dan Friedell
27 October, 2016

Many social media users have a serious question about a photo that went viral.

Is it a picture of Bill Murray or Tom Hanks?

The American actors are both in their 60s. They both have thinning grey hair.

Hanks is known for his roles in movies like Philadelphia, Forrest Gump, and Castaway. He is also known for surprising couples taking wedding photos.

Murray is known for his appearances on the comedy show Saturday Night Live and the movies Ghostbusters and Lost in Translation. He is also a well-known Chicago Cubs baseball fan.

The photo in question shows Laura DiMichele-Ross and her young son along with a man wearing an orange hat and jacket. It was taken in late 2012 at a golf event in Scotland. 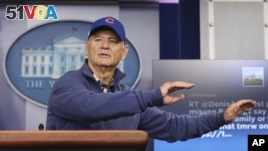 Bill Murray appears at the White House ahead of receiving the Mark Twain Prize.

The boy, Alexander, was only eight months old. His mother said he started crying as soon as he saw the man.

So the man, a famous comedian, made a face just like the crying baby.

The man looks a lot like Tom Hanks, many people say.

But the man in the photo is Bill Murray. She even had the photo signed by Murray when she saw him again two years later.

She said the photo becomes a major topic on social media every once in a while after someone sees it on the Facebook page called: "Reasons My Son Is Crying."

It just proves there is truth to the saying "the internet never forgets."

Do you think the photo is of Tom Hanks or Bill Murray? We want to hear from you. Write to us in the Comments Section or on 51VOA.COM.

viral – adj. spreading very quickly to many people especially through the Internet