Mayweather vs. Pacquiao: 'The Fight of the Century'

Update Required To play the media you will need to either update your browser to a recent version or update your Flash plugin.
By Caty Weaver
30 April, 2015

On May 2nd, two boxers will compete in what is being called the "fight of the century." Philippine citizen Manny Pacquiao will face American Floyd Mayweather, Jr. in Las Vegas, Nevada. Lovers of boxing have been waiting for this match-up for many years. And they are willing to spend a lot of money to see it.

Who gets to go to the fight?

The MGM Grand Garden Arena can hold an audience of about 16,800 people. Only about 1,000 seats were open to the public. They all went in minutes. The lowest-priced seats sold for about $1,500. People who bought these tickets are re-selling them for $4,000. For the best seats in the arena, sellers are asking as much as $350,000 per ticket. 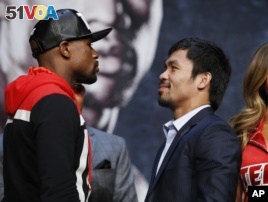 Floyd Mayweather Jr., left, and Manny Pacquiao pose for photographers during a news conference Wednesday, April 29, 2015, in Las Vegas. Mayweather will face Pacquiao in a welterweight boxing match in Las Vegas on May 2. (AP Photo/John Locher)

The rest of the seats were divided among three groups. MGM gets some for its guests. The companies supporting each boxer also control some seats. The rest go to the two television companies sharing broadcast rights.

So, you can watch the fight on television. But, that costs money, too. A pay-per-view order for the fight (in high definition) costs $100. About 3.1 million purchases are expected. The record for pay-per-view purchases happened in 2007. Floyd Mayweather, Jr. beat another boxer, Oscar De La Hoya, in that fight.

Earning millions of dollars a minute

The 38-year-old Floyd Mayweather, Jr. is already the highest-earning athlete in the world. He is so rich that he calls himself "Money." On Tuesday, he carried out the traditional boxing "Grand Arrival." Mayweather showed up at the MGM with a famous university marching band, dancers and put on a huge show.

He told reporters that he expected to make about $200 million dollars from the fight. Mayweather plans to retire in September, after two more fights. He said his father advised him to do so for health reasons.

If Mayweather beats Pacquiao and then another fighter, he will finish his career with a perfect record: 49 fights, 49 wins. Rocky Marciano is the only other fighter in history to have done that.

A reporter asked Floyd Mayweather, Jr. why he did not want to try to beat Marciano's record instead of tie it. Mayweather answered, "to get to 50 may be special to you but not to me."

Manny Pacquiao already holds a record. He is the only fighter to have won championships in eight different weight divisions. He is two years younger than Mayweather but he has fought in 17 more professional fights.

Pacquiao's record is not perfect like Mayweather's. He has several losses. But Pacquiao has had more knockouts than Mayweather.

Pacquiao is a father of five children. He and his wife have been married for fifteen years. Mr. Pacquiao is a congressman. He was elected to the Philippine House of Representatives at the age of 32. He was also a singer and an actor.

Many critics have argued that boxing officials should punish Mayweather for his behavior outside the ring. They say the Nevada State Athletic Commission should not permit the fighter to box.

Win or lose, Mayweather and Pacquiao will enjoy historic paydays. The two boxers are expected to share about $300 million for the day, the highest payday ever in the history of sports.

Caty Weaver wrote this story for Learning English from Washington. Hai Do was the editor.

boxing – n. the sport of fighting someone with your hands while wearing very thick gloves

matchup – n. a sports competition between individuals or teams

pay-per-view – n. a cable television service by which customers can order access to a particular broadcast for a fee

knockout – n. a happening in which a boxing match ends when a fighter has been knocked down by a punch and is unable to start fighting again before 10 seconds have passed

conviction – n. the act of proving that a person is guilty of a crime in a court of law; convict - v.