Update Required To play the media you will need to either update your browser to a recent version or update your Flash plugin.
By Dan Friedell
25 September 2021


On an afternoon in early September, Carnegie Mellon University was busy with students even though it was raining outside.

The grounds of the school on Forbes Avenue in Pittsburgh, Pennsylvania, were different than they were in September 2020. Last year, the university was empty after COVID-19 restrictions kept most students home. 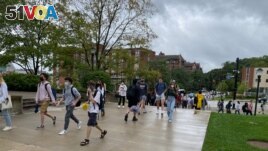 After a year with many students working from home, places to eat and study were once again filled with people – all wearing face coverings indoors.

Last September, Zac Manchester was in his first year as an assistant professor at the school's Robotics Institute. Carnegie Mellon is known for its science and technology programs.

Manchester came to Pennsylvania from Stanford University in California, where he taught aeronautics or flight science.

Manchester communicated through video links throughout the 2020-2021 school year with one of his former Stanford students. They worked on a project that developed a series of small satellites, known as CubeSats. The satellites each weigh about one kilogram.

Manchester watched as Max Holliday built the CubeSats in his kitchen in California. Manchester said Holliday was "doing pretty heroic, insane things with trying to get the satellite stuff to fly."

The three-person team got the satellites ready so they could be included on a SpaceX rocket that launched from Cape Canaveral in Florida on January 24, 2021. Once in orbit, the satellites work together as a group to do things like take photos and communicate using radio signals.

"Given the circumstances, we did a pretty good job of getting [the work] done," Manchester said.

Now, Manchester looks back on that time. Could the satellite project have gone better with more in-person testing? Yes. Did it work out well enough? Yes.

"We built some satellites and got ‘em into space with like a three-person team with one person doing almost all the hardware work from his kitchen. All things considered; I think we pulled off something that was pretty impressive that we got it to happen."

Now that he and his new students are working together in Pittsburgh, the first goal is to catch up on "real world" work.

Manchester and his students spent most of 2021 writing computer instructions and making computer-based predictions of how robots and drones move. These are called computer simulations. Now they have to find out if their predictions were correct by testing them with real robots in a laboratory.

Manchester said he is never surprised when robots "faceplant or crash" the first time out.

"And this is known in the field as the ‘sim-to-real' gap. The simulators are cool, but they don't really reflect reality, ever. And there's always little extra ‘gotchas' when you try to do something in the real world."

Manchester said he and his students were able to get a lot of work done by video, even if some were working outside of the U.S. in their home countries.

By the summer, they completed most of the programming and simulation. By September, even his students who had been outside the U.S., were in Pittsburgh. That permits his lab "to make a pretty big push into getting our stuff up and running on real hardware this fall," he said.

In the courtyard outside the Robotics Institute, Bart Duisterhof, a Ph.D. student from the Netherlands, talked with VOA about his goals. He wants to find a way to reduce the cost of robots so the average person can buy one and make life "more like a sci-fi movie."

Sci-fi is short for science fiction, meaning imaginative movies or books about the future.

He once worked in aerospace but moved to Carnegie Mellon to learn more about computer science and robotics. Duisterhof also said he wants to test his ideas in the real world.

"Because maybe we're just designing something that only works in the simulator, and if we discover [that] 20 years from now, then that's a pretty big problem."

Evan Cohen is a master's student from Pittsburgh. He said he is excited about getting back to work in person because scientists often solve problems by accident. While video calls help people stay in touch, he said, they do not let scientists look around a lab and see what other people are working on. It is much better to be on campus, where students and professors can talk about their projects in buildings and at places to eat.

"A lot of stuff, I think, is just working side-by-side with someone and something just kind of comes up out of nowhere. For me, that's some of the biggest breakthroughs I've had. You get an idea you didn't have before."

Cohen explained that he and his classmates were trying to help a robot to sense barriers. When meeting by video, they could not fix the problem. However, when they met in person and started "tinkering" with the robot, it was easier to "guess-and-check" their ideas.

"I had a whole year online, so I'm glad to experience a semester in person," he said.

Dan Friedell wrote this story for Learning English based on his reporting in Pittsburgh, Pennsylvania. Mario Ritter, Jr. was the editor.

Do you remember a time when you solved a problem by working with a school mate in person? Tell us in the Comments Section and visit 51VOA.COM.

stuff – n. (informal) used to talk about things that you do not describe specifically

circumstances – n. (pl.) the way something happens; the specific details of an event

pulled off – v. (informal) to do something successfully

catch up on – n. to do something that you could have done earlier

drone – n. a kind of small aircraft that flies without a pilot

gap – n. a difference between two things or groups

cool – adj. (informal) approved of; appealing in a way that is generally approved of

gotcha – n. (informal) an unexpected problem or an unpleasant surprise

Ph.D. (doctorate degree) – n. the highest degree given by a university or college

master's (degree) – n. a degree that is given to a student by a college or university usually after one or two years of additional study following a bachelor's degree

tinker – v. to try to repair or improve something, such as a machine, by making small changes