Americans are marking the 50th anniversary of the 1964 Civil Rights Act. The act became law on July 2nd, 1964. The measure banned discrimination based on a person's race. It also ended racial separation in schools, businesses, and in some public places, such as hotels and restaurants.

The law won final passage after years of civil rights protests. Millions of Americans marched for equal rights during the 1960s. Their leader was the Reverend Doctor Martin Luther King, Junior.

"Today I want to say to the people of America and the nations of the world, we are on the move and no wave of racism can stop us."

The civil rights movement brought Dorie Ladner and Joan Mulholland together more than 50 years ago. They met in the southern state of Mississippi. At the time, state officials enforced separation of the races. 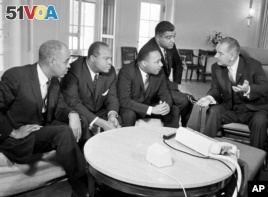 Ms. Ladner remembers meeting with Joan Mulholland in Mississippi. She says it was her first experience working with a white woman in the civil rights movement.

"She was also interested in the plight of not only my people but her people as well to erase this evil segregation that was bothering all of us. I found it phenomenal and I embraced her."

The young women stayed in the same student housing at Tugaloo College in Jackson, Mississippi. They took part in civil rights demonstrations there. Joan Mulholland says she was arrested two times for her actions, but refused to give up.

"I learned in church about ‘do unto others as you would have them do unto you' and then in high school we had to memories the Declaration of Independence. ‘We hold these truths to be self-evident that all men are created equal.' Practice what we preach and that's what propelled me into it."

The two women demonstrated in the 1963 March on Washington, D.C. Less than a month later, four black girls were killed in a church bombing in Birmingham, Alabama. Both women attended the funerals.

"It had a profound impact on me and made me more determined to try and eradicate this evil, this evil that was permeating through our society."

More than half a century later, the women are sharing their experiences with younger Americans. The two were especially happy when then President Lyndon Johnson signed the 1964 Civil Rights Act into law.

"The passing of the civil rights bill was something, one of the things we fought for and has brought about a new day, what we would call ‘social change' to a large extent. Change in the laws of the country, change in attitudes of the people."

The women say they will always share a special connection – one that has lasted through the struggles and victories of the civil rights movement. I'm Jonathan Evans.

This report is based on a story from VOA's Chris Simkins.