US-South Korea Exercise May Be Part of Nuclear Deal

Update Required To play the media you will need to either update your browser to a recent version or update your Flash plugin.
By Phil Dierking
02 April, 2018


Joint military exercises between the United States and South Korea went ahead as planned this week.

However, permanently ending the exercises could become an important part of future nuclear talks with North Korea.

They were delayed this year because of the Winter Olympics in South Korea. The exercises also were reduced in size because of upcoming talks to end North Korea's nuclear program.

The exercises, known as Foal Eagle and Key Resolve, are expected to be similar to those in the past. They will include more than 23,000 U.S. soldiers and 300,000 South Korean forces. The soldiers will be involved in battlefield exercises. They also will train for computer-simulated attacks from North Korea.

This year, more attention is being given to the defensive nature of the exercises. In the past, the exercises where based on operations to target the leadership in North Korea's capital, Pyongyang.

U.S. bombers able to carry nuclear weapons and nuclear aircraft carriers are not expected to be involved. In addition, the training period has been shortened.

Kim Tae-woo is a military expert with Konyang University in South Korea. He said, "The period has actually been reduced into half. Although it was announced that it is at the same level as in normal years, we see that it is reduced in size compared to other years." 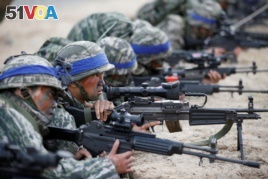 On Monday, the South Korean government did not make a major announcement about the exercises. The Unification Ministry instead noted the continued improvement of relations between the two Koreas.

There have been signs of increased exchanges between the South and the North.

Kim's attendance was seen as a sign of friendliness after South Korean President Moon Jae-in attended a North Korean orchestra in Seoul. The orchestra was part of the North's delegation to the PyeongChang Winter Olympics.

The two Koreas agreed last week to hold a meeting between their leaders on April 27.

The reduced size of the exercises appears to be a temporary compromise to continue the diplomatic developments with North Korea. The North has said it is open to holding denuclearization talks with South Korea and the U.S.

North Korea only recently moved away from threatening missile and nuclear tests.

However, there are concerns that further restricting or ending the joint exercises could become an important part of the nuclear negotiations.

Go Myong-Hyun is a North Korean expert with the Asian Institute for Policy Studies in Seoul. He said, "In order to make progress in the denuclearization front, South Korea will somehow have to downscale or even cancel the joint military exercise."

The North Korean leader said he no longer objects to the joint exercises when he met recently with a South Korean diplomatic representative.

However, Kim Jong Un also said ending the military threat against the North would be an important part of its nuclear disarmament. In the past, that demand has meant ending the U.S. military presence in Korea.

Chung Eui-yong is President Moon's National Security Adviser. He noted that North Korea "said that there was no need to keep its nuclear program as long as there was no military threat against it."

Moon has so far tried to balance improving relations with the North with South Korea's military partnership with the U.S.

Some experts say his policies risk reducing the U.S. campaign of "pressure" on North Korea supported by President Donald Trump.

For now, the U.S. President has shown flexibility in agreeing to meet with Kim Jong Un and permitting Moon's request to decrease the joint exercises, to give diplomacy a chance.

This story was originally reported by Brian Padden for VOAnews. Phil Dierking adapted it for VOA Learning English. Mario Ritter was the editor.

Do you think it's a good idea to decrease military exercises for the sake of diplomatic improvements? We want to hear from you. Write to us in the Comments Section or on 51VOA.COM.

aircraft carriers - n. a military ship that has a large deck where aircraft take off and land

downscale - v. to make (something) smaller

orchestra - n. a group of musicians who play usually classical music together and who are led by a conductor

presence - n. the fact of being in a particular place

flexibility - n. willing to change or to try different things