Update Required To play the media you will need to either update your browser to a recent version or update your Flash plugin.
By Phil Dierking
03 September, 2018


Parts of Chile are facing a growing water crisis.

The Reuters news agency reports the government is taking steps to protect the country's water supplies from mining operations. But for many years, the Chilean government approved water extraction rights with little consideration for their effect on the environment.

Mining companies were quick to claim the water available in the salt flats of the Salar de Atacama. The Salar sits in the world's driest desert. The water trapped below feeds the biggest copper mine in the world.

The mine holds more than one-third of the world's known supply of lithium, a very light metal. Lithium is used to power batteries in electric vehicles. It also is used in mobile phones and laptop computers.

Lithium can be extracted from water found in mines. However, demand for water has grown so much that the Chilean government is trying to limit its usage. No one really knows how much water there is in the Salar de Atcama area.

Oscar Cristi was recently appointed head of Chile's water authority. He says the development agency Corfo hopes to provide more information after it releases a study in December. Corfo helps to oversee lithium mining in the Salar. 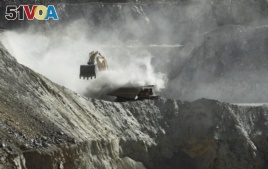 In this Sept. 25, 2012 photo, a bulldozer works at the Chuquicamata copper mine in the Atacama desert in northern Chile.

A war for water

The government, Cristi said, has been unwilling to propose bans on water extraction. The mining industry is paying attention to what he says. A few weeks ago, his agency ordered a ban on new permits to extract water from an aquifer that supplies water to BHP's Escondida mine, the world's largest copper mine.

The agency is also preparing to create a drinking water reserve near the operations of top lithium producers SQM and Albemarle. The move would enable the government to further limit water use there.

SQM and Albemarle say they have all the water rights they need and do not expect new limits to affect their current or future production of lithium.

International demand for lithium is growing. Chile is home to nearly 50 percent of the world's reserves of the metal.

However, there is plenty of competition for the water needed to mine lithium. Native groups, SQM and Albemarle, local copper miners and newcomers to the area are all competing for water.

Recently, SQM and Albemarle both signed deals with the government to sharply increase the amount of lithium they can remove from the Salar. The two businesses say they will not use any more water than the amount already approved. New companies like Wealth Minerals, New Energy Metals, and Lithium Chile have also announced projects in the salt flats.

On a computer, Christi shows line after line of the water rights approved many years ago in the southernmost part of the Salar. When added up, they represent water supplies six times greater than the government now believes is available.

Past governments did not correctly map how much water is available, says Cristi. Now, observation wells are being built in some areas.

"Our (understanding) continues to be limited now, but back then, it was very limited," he said.

The combined effect of water rights approved over the years to copper and lithium miners in the world's driest desert has never been considered, notes Ingrid Garces.

Garces studies salt flats and serves as a professor at Chile's University of Antofagasta.

"We're managing lithium as though it were a type of hard-rock mining," she said. "But we're mining water, not rock. This is a watershed."

Take too much water from one place, she said, and it may affect another.

Another problem affecting water extraction in Chile is who should deal with legal questions.

The brine from which miners extract lithium is water. In Chile, brine is considered a mineral like copper. Environmental officials act on requests for permits of brine, but the water authority manages freshwater pumping.

A lack of communication between the two authorities, combined with a lack of understanding the relationship of the two substances, has made it difficult for authorities to act, says Cristi.

aquifer - n. a layer of rock or sand that can absorb and hold water

authority - n. a government organization that has control of a specified activity or area

brine - n. the salty water of the ocean

extract - v. to remove (something) by pulling it out or cutting it out

mobile - adj. able to be moved

reserve - n. an area of land where animals and plants are given special protection

watershed - n. a line of hills or mountains from which rivers drain