Update Required To play the media you will need to either update your browser to a recent version or update your Flash plugin.
By Anne Ball
04 September, 2016


A surprising discovery has been made in the treatment of Alzheimer's, the brain disease that causes memory loss and other problems.

Alzheimer's is a progressive disease. It worsens over time. It affects many parts of people's lives, including the ability to remember, think and make decisions.

The findings were published in the journal Nature Communications. David Brough of Britain's University of Manchester led the research.

This is how the experiment worked:

The scientists did experiments with mice that were engineered to develop Alzheimer's symptoms.

Like humans who get the disease, the laboratory mice developed memory problems over time.

Then the animals were placed in a maze -- a complex group of connected paths. They had to learn how to move around the maze without problems.

Mike Daniels was a researcher on the study. In a Skype interview he said the mice who received the drug learned the maze easily. That was not true for the mice who did not get the medicine.

"We tried to train the mice once they had Alzheimer's Disease, and the Alzheimer's mice are un-trainable. They cannot learn that maze."

The researchers were excited by the results with the drug-treated mice.

"What was just amazing is, is that this drug seemed to, seemed to render the mice completely normal. It is something we have not really seen before, but there needs to be a lot more work done to really confirm whether this is, whether this is real."

How does this drug work?

Daniels says brain imaging shows a lot of harmful inflammation in the brains of Alzheimer's patients. Inflammation is a condition in which parts of your body swells, warms and often hurts.

Researchers believe mefenamic acid reduces that brain inflammation. But other drugs -- like ibuprofen -- which are also used to stop inflammation, did not help.

Jack Rivers-Auty is the study's co-author. He says it is difficult to say whether mefenamic acid would work at all stages, or levels, of Alzheimer's. The stages change from mild thinking and memory problems to the inability to communicate in any way. 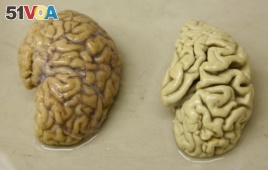 The researchers say the drug is already approved by the U.S. government and is known to be safe. So, after more testing, mefenamic acid may be available quickly to treat Alzheimer's patients.

In another recent study, researchers testing a drug on humans found it slowed the progress of Alzheimer's Disease. People were given aducanumab, a drug that fights substances that build up in the brain of Alzheimer's patients.

The researchers reported that in the brains of those given the treatment, there was an "almost complete clearance" of the amyloid plaques, according to the AFP news agency.

But researchers said that while the results are exciting, it is too early to know if this is an effective treatment for the disease. More tests are planned.

The study results were published in the journal Nature.

Alzheimer's is the most common form of a group of brain diseases causing memory loss that are collectively called "dementia."

Jessica Berman reported this story for VOANews. Anne Ball adapted it for Learning English. Caty Weaver was the editor.

reverse – adj. opposite of what is usual

render – v. to cause someone to be in a specific condition

stage – n. a particular point or period in the growth or development of something

amyloid plaques – n. sticky substance that builds up outside nerve cells in the brain and damage it