Erdogan: NATO Must Take Stance against US

Update Required To play the media you will need to either update your browser to a recent version or update your Flash plugin.
By Hai Do
16 January, 2018


Turkey's president has called on the country's defense allies to take a stance against an American plan for a Kurdish-led border security force in Syria.

President Recep Tayyip Erdogan said members of the North Atlantic Treaty Organization, or NATO, should oppose such a force.

The United States and its partners want to establish the security force to control the border area between Syria, Iraq and Turkey.

The move is part of the United States-led effort against the Islamic State group often called IS.

Syrian Kurdish militia are to lead the new security force, which is expected to reach 30,000 members in the next few years. 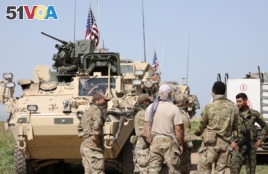 FILE - Kurdish fighters from the People's Protection Units (YPG) chat with members of U.S. forces in the town of Darbasiya next to the Turkish border, Syria, April 29, 2017.

However, Turkey has been threatening to launch a military offensive in Syria against Kurdish militia there. Turkey considers them to be terrorists because of their ties to outlawed Kurdish rebels fighting Turkey.

On Monday, Erdogan accused the United States of creating a "terror army" in Syria, along the border with Turkey. He said Turkey would destroy this army "before it's even born."

Erdogan addressed members of his ruling party on Tuesday. During his speech, he said: "Hey NATO! You are obliged to make a stance against those who harass and violate the borders of your members."

Both Turkey and the U.S. are NATO members.

NATO called Turkey "a highly valued ally" and said the alliance was committed to Turkey's defense. However, it said that the matter was an issue for the anti-IS coalition led by the U.S.

Ties between Turkey and the United States have worsened over U.S. support of the Kurdish militia.

Turkey says the Kurdish People's Defense Units, or YPG, is a major threat to its security. But the U.S. has relied on Kurdish militia with ties to the YPG to defeat the Islamic State terror group.

The U.S. also has said the new Kurdish-led security force is important to prevent the return of the Islamic State group in Syria and Iraq.

Russia, a major force in the area, opposed the U.S. plan for a border security force. It said the force could lead to the splitting up of Syria.

The Syrian government called the U.S. plan an attack on Syrian sovereignty. It promised to win back control of the whole country and remove any form of US-backed Syrian Kurdish force. 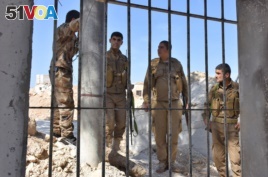 FILE - Fighters from the Kurdish People's Protection Units (YPG) monitor troop movements in the area of Afrin, along Syria's northern border with Turkey, on June 9, 2017.

Erdogan said on Tuesday that Turkey is planning an attack on the Kurdish-controlled area of Afrin in northern Syria. Turkey has already moved more troops to its border and fired artillery at the city in recent weeks. The Turkish president added that Turkey would conduct the operation in Afrin with Turkish-backed Syrian opposition forces.

Erdogan was asked if he planned to discuss the Kurdish-led border force with U.S. President Donald Trump. But, he said he had no plans to call the U.S. leader.

The state-operated Anadolu Agency reported Erdogan's comments. He said, "We discussed the issue before. He said he would get back to me. I won't call him as long as he does not get back to me."

Hai Do adapted this story for Learning English based on AP news and other reports. Mario Ritter was the editor.

obliged –adj. required to do something

harass –v. to make repeated attacks against an enemy

rely –v. to depend on, to need for support

sovereignty –n. to be independent and have the right to govern oneself