Update Required To play the media you will need to either update your browser to a recent version or update your Flash plugin.
By VOA
15 November, 2012

Ethiopia is one of the last countries in Africa to permit mobile banking.

Mobile banking has proved to be profitable in the developing world, where many people still do not use banks. Earlier this year, the World Bank reported that seventy-five percent of the world's poor are "unbanked." That is about two point five billion people. Banking through mobile telephones lets people take part in financial services even if they are not near a bank office. 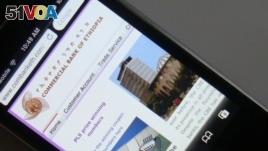 Ethiopia is one of the few remaining African countries to introduce mobile banking.
In Africa, only Ethiopia and Zimbabwe do not provide mobile money services. Now, that will change for Ethiopia.

BelCash and M-Birr are mobile banking technology providers. They have been setting up mobile banking and mobile money services in Ethiopia for the past three years.

Dutch company BelCash is working in partnership with banks to provide easier access to financing through bank accounts. Ireland-based M-Birr is a mobile money service that works with micro finance groups where no registration at a bank is needed.

Ethiopia's mobile industry is young. And wireless service coverage in the country is not well developed. The pressure on the wireless network is expected to increase.

In the past four years, the number of mobile users grew from three to seventeen million. And Ethiopia's telecommunications provider, Ethio Telecom, expects that number to grow to forty million in the next three years.

The government closely controls Ethiopia's telecommunications market. That means there is only one provider. Competition is not permitted.

He says, if Ethiopia had no restrictions, his company would have to compete with larger companies.

Ethiopia has looked at other developing countries with mobile banking. National Bank of Ethiopia officials visited Kenya, Pakistan and Brazil.

Frezer Ayalew is with the National Bank of Ethiopia. He says mobile banking services will help the country.

"For the economy it has great contribution in terms of mobilizing domestic savings with these services."