Update Required To play the media you will need to either update your browser to a recent version or update your Flash plugin.
By Dan Novak
17 June 2022


The European Union , or EU, gave its support Friday to Ukraine and its neighbor Moldova to become candidates to join the group.

Ursula von der Leyen is the European Commission President. Wearing Ukrainian colors, she told reporters, "Ukrainians are ready to die for the European perspective. We want them to live with us the European dream." 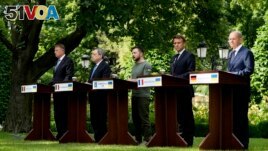 The move was only the start of a process that could take many years. But it puts Ukraine on a path to meeting a goal that did not seem possible just a few months ago.

Ukraine applied to join the EU just four days after Russian troops invaded in February. Four days later, so did Moldova and Georgia, two other small states from the old Soviet Union.

The EU was born after World War II to avoid another conflict between Germany and France. The group has since expanded to become a 27-nation economic and political union.

When Russian President Vladimir Putin began the invasion of Ukraine, one of his main goals was to stop the expansion of Western organizations, like the EU and the NATO military alliance.

But the war has had the opposite effect.

Finland and Sweden have asked to join NATO. The EU has now considered opening its doors to Ukraine and Moldova, but not Georgia. Von der Leyen said Georgia had a strong application but still must meet certain political requirements.

The EU usually takes a slow approach to expansion. But the urgency of the war and Ukraine's request for a quick consideration could change that.

Leaders of EU countries are expected to officially support the decision at a meeting next week. The leaders of the three biggest countries - Germany, France and Italy - had signaled their support on Thursday by visiting Kyiv.

A group of EU countries including Poland wants full support for Ukraine. But others, like the Netherlands, want the group to be more careful. EU leaders want to support Ukraine's membership but do not want to show favoritism to the country.

Joining the EU requires years of reform, in areas ranging from the judicial system and financial services to food safety. Ukraine's request to be considered quickly for membership represents a change in how the EU usually operates.

Turkey, for example, applied for membership in 1987. It became a candidate in 1999 and had to wait until 2005 to start talks on its membership application. Talks between Turkey and the EU are now completely stopped because of disagreements between the two sides.

Six nations in the Western Balkans also have faced long waits for their EU membership. Membership talks require approval from all 27 EU nations.

If admitted, Ukraine would be the EU's largest country by size and its fifth most populous.

Dan Novak adapted this story for VOA Learning English based on reporting from Reuters and The Associated Press.

perspective — n. a way of thinking about and understanding something

application — n. a formal and usually written request for something