EU Court: Headscarf Ban in Workplace Legal in Some Cases

Update Required To play the media you will need to either update your browser to a recent version or update your Flash plugin.
By Bryan Lynn
14 March, 2017


The European Union's highest court has ruled that employers can ban some religious symbols, including headscarves, in the workplace.

The European Court of Justice, however, said such a ban must be part of a company's policy for all employees to "dress neutrally." If such a policy is followed, workers can be barred from wearing "visible signs of political, philosophical or religious beliefs."

The court said it does not consider such bans "direct discrimination" by companies when carried out in this way.

The Court of Justice of the European Union ruled on two cases involving women who were fired from jobs for refusing to remove headscarves.

The headscarf is an important religious symbol for Muslim women.

One woman lost her job in France because a customer complained to the company about her Islamic headscarf. In that case, the court ruled that a customer's complaint alone does not meet the requirement for a company to ban religious symbols.

In the other case, the court found that a company in Belgium may have correctly exercised its right to dismiss an employee. The court found the company had fairly applied a dress code policy for all employees in an effort to project an image of political and religious neutrality.

Both cases were referred from their home countries to the Court of Justice of the European Union for legal guidance. Courts in those countries must still rule on those cases.

Rights group Amnesty International called the rulings "disappointing." In a statement, it said the decisions "give greater leeway to employers to discriminate against women - and men - on the grounds of religious belief." 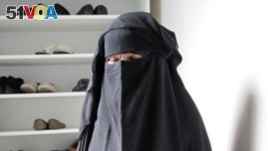 A woman named Yamina at the Fraternite, or Brotherhood mosque in Aubervilliers, outside Paris, France.

France already bans headscarves and other religious symbols in classrooms. It also bans face-covering veils in public. Some other European countries have put restrictions on full-face veils in public, while many others have proposed bans.

Bryan Lynn adapted this story for VOA Learning English, based on reports from the Associated Press, Reuters and Agence France-Presse. Mario Ritter was the editor.

neutrally – adv. not supporting any side of an issue or argument

dress code – n. rules for what clothing can be worn in school or work

headscarf – n. piece of cloth worn over a woman's head

leeway – n. freedom to do something the way you want to do it

veil – n. thin piece of material that covers the face