Update Required To play the media you will need to either update your browser to a recent version or update your Flash plugin.
By Jonathan Evans
24 September, 2018


A former nuclear weapons center is now a wildlife refuge.

The new wildlife refuge is about 26 kilometers northwest of Denver, Colorado's capital. The refuge is generally on flat land and covered with tall grass. It is home to bears, elk, falcons, songbirds and hundreds of other animals. Visitors to the area can enjoy views of the Rocky Mountains and some of Denver's tallest buildings. 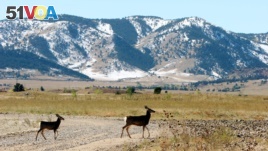 Deer cross a road stripped of its asphalt at the former Rocky Flats Nuclear Weapons plant near Golden, Colo. Oct. 13, 2005.

Jerry Jacka spent two hours riding his bicycle at the refuge last week. He says he was not worried about his safety. He told the Associated Press, "I don't believe that they're covering up any sort of information about pollutants and radioactive elements and stuff in the soil."

The federal government built plutonium triggers at Rocky Flats from 1952 to 1989. During that period, there were a number of fires, leaks and spills at the factory. It was closed after a criminal investigation into environmental violations.

The U.S. Energy Department said it found 28 kilograms of plutonium stuck in airways inside factory buildings.

Over the years, Rocky Flats' operations were under the control of a number of businesses, including Rockwell International. In 1992, a court ordered Rockwell to pay a fine of $18.5 million after it admitted guilt to charges that included mishandling chemical and radioactive material.

The weapons factory covered five square kilometers at the center of the property. The area was cleaned up at a cost of $7 billion, but people are still barred from going there. The 21-square-kilometer area surrounding the factory was given to the U.S. Fish and Wildlife Service for a wildlife refuge.

About 16 kilometers of walkways are now open at the refuge. Visitors are told to stay on the paths and not go into the grasslands.

State and federal health officials say the area is safe. But some people worry that plutonium particles could have escaped and are still on the property. Some are concerned that visitors could unsettle the particles or bring them home. At least seven Denver-area school districts have banned school field trips to the refuge.

Plutonium can get trapped in lung tissue, where it can kill lung cells and damage the tissue. The Centers for Disease Control and Prevention says the tissue damage can lead to lung disease and cancer.

Jon Simon rode his mountain bike on the refuge trails last week. Simon says he did not think he would develop plutonium-related health problems. But he worries that children might be at risk.

"I wouldn't want to walk my kid through here every day in the morning for our morning walk or something like that," he said.

stuff – n. materials, supplies, or equipment; used to refer to something when you do not need to name exactly what it is

mishandle – v. to deal with in the wrong day

view – n. the ability to see something or to be seen from a place

trigger – n. a device that activates something else, causing it to explode