Update Required To play the media you will need to either update your browser to a recent version or update your Flash plugin.
By Bryan Lynn
17 December 2020

His office said in a statement Thursday that Macron took the test as soon as the first signs of the virus appeared late Wednesday. The statement did not provide details on what symptoms Macron had experienced or what treatment he might be receiving. 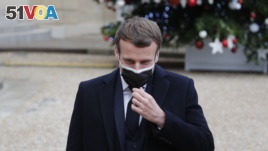 The 42-year-old president will "self-isolate" for seven days to prevent further spreading. His office added that Macron plans to "continue to work and take care of his activities at a distance."

Other top French officials who were in close contact with Macron, including Prime Minister Jean Castex, were also self-isolating. The president's wife, Brigitte, was doing the same. She tested negative and experienced no symptoms, her office said.

During the Brussels gathering, Macron, Merkel, Italian Prime Minister Giuseppe Conte and others were seen talking together inside the meeting room. Television images of the summit showed the leaders wearing face coverings and generally keeping distance from each other.

An EU official told The Associated Press the organization had not been informed about any other leaders or members of their teams testing positive.

Macron has canceled all upcoming trips. That includes a December 22 visit to Lebanon, where he has led international efforts to help solve a long-standing political crisis.

News about Macron's infection comes as the country continues to battle COVID-19. France has one of the highest COVID-19 death rates in Western Europe, with nearly 60,000 people killed.

Macron's positive test came just after France eased restrictions that were put in place after a second wave of cases hit the country.

The new rules permit people to go to school and work, but limit travel for most French people. All restaurants, tourist sites and most other public places must remain closed. The recording of over 17,000 new cases on Wednesday alone raised concerns about infection rates as the nation heads into the holiday season.

Macron had planned to appear before the French Senate on Thursday to discuss his government's vaccine plans to fight COVID-19.

French officials have said the country is expected to receive around 1.16 million COVID-19 vaccine doses by the end of this year. A vaccination program for the whole country is planned for the end of spring.

But the French government faces one big problem. A recent public opinion study found that only 53 percent of French people want to be vaccinated. That is among the lowest rates in the world.

Reuters, The Associated Press and Agence France-Presse reported on this story. Bryan Lynn adapted the reports for VOA Learning English. Ashley Thompson was the editor.

symptom – n. a sign or marker of something, such as disease

negative – adj. in a medical test, negative means the person being tested does not have a disease or condition

tourist – n. one who visits a place for pleasure

dose – n. the amount of a medicine or vaccine that is needed to be effective against disease