5G Delayed Near US Airports after Warning from Airlines

Update Required To play the media you will need to either update your browser to a recent version or update your Flash plugin.
By Hai Do
18 January 2022


The two largest wireless companies in the United States said Tuesday they would delay the start of high-speed 5G mobile service near some airports.

The move came after several major airlines in the country warned that deploying 5G service near the airports could be "catastrophic."

In a letter to federal officials on Monday, the heads of 10 airlines including American, Delta, United, and Southwest said 5G will be more disruptive than they originally thought. They wrote that "more than 1,100 flights and 100,000 passengers" could be affected daily with cancellations and delays. They said, "the nation's commerce will grind to a halt." 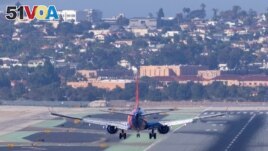 FILE - A Southwest Airlines plane approaches to land at San Diego International Airport. Wireless companies in the U.S. said they would delay the start of high-speed 5G service near some airports after warnings from airlines of possible disruptions. (REUTERS/Mike Blake/File)

The airlines asked that 5G could be deployed everywhere in the country except within "3.2 km of airport runways" at some important airports.

On Tuesday, AT&T, one of the largest wireless providers in the U.S., said it would "temporarily" delay turning on 5G transmitters at some airports. The company said it would work with the federal government to settle the dispute.

The nation's largest wireless company, Verizon, said it will launch its 5G service. But the company added, "we have voluntarily decided to limit our 5G network around airports."

Two weeks ago, the wireless companies had also agreed to reduce the power of 5G transmitters near 50 airports in the U.S. for six months.

AT&T and Verizon were planning to start their 5G service Wednesday. The start of the high-speed service has been delayed two times since early December.

Airliners say the C band is too close

The new 5G network promises faster internet speeds and larger network capacity. 5G, which stands for fifth-generation, is about 10 times faster than the existing 4G network.

The 5G network runs on a radio spectrum known as the C band which airline companies say could interfere with the operation of some altimeters. An altimeter sends radio waves from an airplane to the ground to measure how far above the ground an airplane is traveling. Pilots use it to help with landing planes and identifying dangerous changes in wind speed and direction known as wind shear.

Verizon and AT&T have argued that 5G has been deployed in about 40 other countries without interference issues.

CTIA is a U.S. wireless trade group. It said in a filing with the Federal Communications Commission, "Wireless carriers in nearly 40 countries throughout Europe and Asia now use the C band for 5G, with no reported effects on radio altimeters that operate in the same internationally designated 4.2-4.4 GHz band."

The Federal Aviation Administration, or FAA, oversees airline safety in the U.S. The agency said on Sunday it had cleared an estimated 45 percent of the U.S. commercial airplanes to perform low-visibility landings at many airports where 5G will be deployed. The airlines, however, noted on Monday that the list did not include many large airports.

The FAA expects to issue more approvals before Wednesday. And the agency added it "continues to work with the aviation industry and wireless companies to try to limit 5G-related flight delays and cancellations."

Why is 5G not an issue in other countries?

In Europe, 5G network operates in a 3.4 to 3.8 GHz range. That spectrum is slightly lower than the range set to be deployed in the U.S.

The European Union Aviation Safety Agency (EASA) said on Dec. 17 the issue was specific to U.S. airspace. The agency added, "At this stage, no risk of unsafe interference has been identified in Europe."

In South Korea, the 5G mobile communication range is from 3.42 to 3.7 GHz. There has been no report of interference with radio waves since the start of the high-speed network in 2019.

grind to a halt - phrase, to stop working or moving forward

capacity – n. the amount of something that can be managed

designate – v. to officially choose something

aviation – n. the business of flying