Update Required To play the media you will need to either update your browser to a recent version or update your Flash plugin.
By Anna Matteo
29 March 2021

In 2020, many people in the United States found an escape by going out into nature and open places. Hiking trails, parks and other outdoor spaces were very busy with people searching for fresh air during coronavirus health crisis restrictions.

People, who were staying at home and whose gyms were closed, took their exercise to the "Great Outdoors." Sports such as hiking, biking, cross-country skiing, snowshoeing, camping, tennis, and golf all became more popular.

In 2021, that seems to be continuing. People are still finding ways to play outdoors within coronavirus restrictions and stay-at-home guidelines.

The Outdoor Foundation is part of the Outdoor Industry Association, a trade group. It released numbers comparing Americans' outdoor activities in 2019 and 2020. The group said 8.1 million more Americans went hiking, 7.9 million more went camping and 3.4 million more people went freshwater fishing in 2020 than in the year before.

In 2020, the foundation's research also found a 52.9 percent increase in outdoor activity for most age groups and all income levels.

"It's both heartening and a little bit mind-blowing to think how things are going this year," said Richard Hodges. He is the director at White Pine Touring in Park City, Utah. 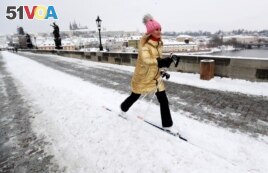 Cross-country skiing has become much more popular. It is skiing that is done over the countryside instead of down a mountain.

"Every single day of the week is like a weekend day," said Hodges. The park in Utah where he works has about 20 kilometers of paths. He said there seems to be a "limitless interest right now in cross-country skiing."

"It's been really fun — a lot of work, but really fun. All we're doing is trying to get people outside to go play in the snow."

More hikers have been walking along the Appalachian Trail since the beginning of the health crisis. The trail is about 3,540 kilometers long and goes through 14 states. It gets more than 3 million visitors each year.

Marra told the Associated Press that many people, who never really exercised outdoors, found easy-to-use trails and spaces near their homes. However, she warns people not to do too much.

"...We're finding a lot of people are out there not prepared for just how rugged this trail is. It's not a walk on the bike trail in the middle of the city," she said.

She also warns to be careful when going out for a long nature walk. She suggests hikers study weather reports and information about wildlife in the area. They should wear the right clothes for the right weather. And they should also bring supplies and maps.

Golf remains popular as well. The U.S. National Golf Foundation said that Americans played almost 502 million rounds of golf in 2020. The number of golfers in the U.S. increased by half a million in 2020 to 24.8 million, the group found.

The sport also grew around the world. Golf Australia said golfing has increased up to 15 percent since the restrictions went into effect. Already popular in Sweden, the number of golf rounds played increased 42 percent. And Golf Olivar de la Hinojosa in Spain had an increase of 30 percent.

Ana Fernández de Diego is a Spanish professional golfer and teaches the sport. She said the level of growth in the sport has not been seen before.

"Golf is one of the things that people can do without any risks now," she said.

Tennis is also more popular. The United States Tennis Association, or USTA, said that in 2020 there was nearly three million first-time players. In all, more than 21.6 million Americans played the game on tennis courts last year.

Mike Dowse is chief of the USTA. He said on its website that many people see "tennis as the ideal social-distancing sport."

From hiking to tennis and golf to cold weather sports – businesses are happy to the see the outdoor exercising activities get more popular.

Marra, of the Appalachian Trail Conservancy, also sees it as a great thing for the environment. With more people using the outdoors, it may be more likely they will take care of it.

"This is the new future for us," she said. "The new reality."

trail –n. a simple path through a forest, field or natural area

gym (gymnasium) –n. a room or building that has equipment and space for sports activities and exercise

heartening –adj. something that causes people to feel happier or more hopeful