Hungarian Family Sails around the World during Pandemic

Update Required To play the media you will need to either update your browser to a recent version or update your Flash plugin.
By Armen Kassabian
03 February 2021


A Hungarian family of four is sailing around the world on a 15-meter boat called "Teatime."

In late June 2020, they left a port in Croatia and started sailing around Italy and Spain. They next stopped on the island of Cape Verde before crossing the Atlantic Ocean. 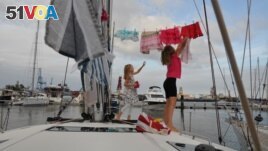 Katalin Bosze and Boroka Bosze hang their clothes to dry on the sailing boat 'Teatime' in Las Palmas, Spain. Picture taken on October 5, 2020. (Sailingteatime via Reuters)

The family spent the Christmas holiday in the French territory of Martinique. They were recently in Marigot, on the Caribbean island of St. Martin. They expect to sail towards the Panama Canal next.

The family is not trying to reach their goal quickly.

Life on the boat is slower. It is similar for people quarantined at home because of the worldwide coronavirus health emergency.

Domonkos Bosze is the 48-year-old father. He works in the Information Technology business and made a home office on his boat. Now, his family is always close by.

"For me it is a fantastic experience that I can spend a lot more time with my kids, instead of getting home late from work totally exhausted," said Domonkos.

The family chooses where they will sail next based on the weather and seasons. Domonkos and his wife Anna have sailed for more than 10 years. They planned the trip long before the COVID-19 crisis began.

The family had their worries about starting a risky trip during a global health emergency. The situation made it difficult to decide if it was the right time to go. But in the end, their determination pushed them to sail around the world.

Sailing the sea on the boat ‘Teatime'

At the beginning of the trip, living on a small boat with four people was difficult. With time, they learned how to live together. The boat is named "Teatime," after the family's habit of sitting down to drink tea and talk together.

The biggest problem they had was during a six-hour storm crossing the Atlantic Ocean. They lost a toaster and a satellite phone.

They follow the changes in coronavirus rules in each country and take a test or go into quarantine when required.

"When we arrived in Martinique...we told authorities that we just spent 16 days on the open seas and they accepted that as quarantine," Domonkos said.

They have enough food for a month. The six- and eight-year old daughters love watching their parents catch fish, such as tuna or mahi mahi.

The two girls do remote learning and plan to study in local schools if possible, to learn in different cultures. Anna said the trip gave her freedom, although she cooks regularly and helps with the sails if needed.

"We saw dolphins jumping at the bow of the boat and swimming with us, with the sea totally calm," she said.

Depending on COVID-19 restrictions, the family plans to sail this year or the next towards the Pacific Ocean. They say their trip could last up to six years more. That is because they might stop for longer periods of time in the southern Pacific and Indian Oceans.

Krisztina Than from Reuters reported this story. Armen Kassabian adapted it for Learning English. Mario Ritter, Jr. was the editor.

quarantined –adj. a period of time during which a person who might have a disease is kept ways from others to prevent spreading that disease

exhausted – v. to use all of someone's mental or physical energy

determination –n. a quality that makes you continue trying to do or achieve something that is difficult

toaster – n. an electrical device used for heating up bread

authorities – n. people who have the power to make decisions and enforce rules and laws

How has the pandemic changed the way people live with their family? We want to hear from you. Write to us in the Comments Section.