Update Required To play the media you will need to either update your browser to a recent version or update your Flash plugin.
By VOA
20 November 2022


The American space agency NASA recently launched its powerful Space Launch System (SLS) rocket and Orion spacecraft on a test mission to fly around the moon.

The launch marked the first flight for SLS, which NASA describes as the most powerful rocket ever built. The project has faced years of delays and is running billions of dollars over budget.

Now that the rocket has launched and successfully deployed its spacecraft, we are taking a closer look at the mission NASA says is the first step in returning astronauts to the moon. 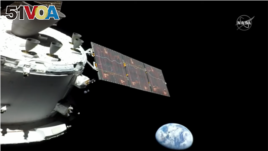 A view of Earth as seen from the Artemis I Orion capsule about 9 hours into flight on Nov. 16, 2022

The SLS mission is part of NASA's Artemis program, which aims to land Americans on the moon by the mid-2020s. It would be the first moon landing by astronauts since NASA's Apollo 17 mission in 1972. The next crew to land on the moon is expected to include the first woman and the first person of color.

The goal of the latest uncrewed test mission is to prepare for Artemis II, which will include astronauts traveling inside the Orion spacecraft, or capsule. If all goes well during those missions, NASA will launch Artemis III, with the goal of landing astronauts on the moon’s surface.

The Orion capsule is expected to complete a 25-day flight that will bring it to within 97 kilometers of the lunar surface. It will travel 64,000 kilometers beyond the moon before heading back to Earth.

NASA is testing the effects of the trip on three mannequins built as models for real human astronauts. They are connected to a series of sensors designed to measure radiation and movements throughout the mission.

At 98 meters, SLS is shorter and thinner than the Saturn V rockets that carried 24 Apollo astronauts to the moon in the 1960s and 1970’s. But the new moon rocket is much more powerful, with 4 million kilograms of thrust.

NASA's high-tech, self-flying Orion capsule is named after the Orion constellation, which can be seen around the world and is among the brightest in the sky. At 3 meters tall, Orion is roomier than Apollo's capsule and seats four astronauts instead of three. Unlike the SLS rocket, Orion has launched before. It circled Earth twice in 2014.

Orion is carrying a series of equipment, known as payloads, to support science experiments. Among the payloads are 10 CubeSats. These are small research spacecraft also called nanosatellites.

One of the CubeSats is designed specifically to look for and examine lunar ice while Orion orbits the moon. Others will collect other lunar data in an effort to provide scientists with more detailed information on the materials the moon is made of.

More than 50 years later, Apollo still stands as one of NASA’s greatest achievements. Using 1960s technology, NASA took just eight years to go from launching its first astronaut, Alan Shepard, to landing Neil Armstrong and Edwin “Buzz” Aldrin on the moon. By comparison, Artemis has already been in development for more than 10 years.

While 12 Apollo astronauts walked on the moon from 1969 through 1972, none stayed on the lunar surface for longer than three days at a time. For Artemis, NASA will draw from a more diverse pool of astronauts. The agency is also expanding the time crews spend on the moon to at least a week.

The Artemis program also calls for establishing a long-term base on the moon that could one day launch astronauts to Mars.

Bryan Lynn wrote this story for VOA Learning English, based on reports from The Associated Press, Reuters and NASA.

constellation – adj. a grouping of stars

achievement – n. a thing that is completed successfully

diverse – adj. including many different kinds of something