Update Required To play the media you will need to either update your browser to a recent version or update your Flash plugin.
By VOA
01 April, 2015


Nigeria's newly elected President Muhammadu Buhari said his country has "embraced democracy" with the first peaceful handover of power since the end of military rule in 1999.

Mr. Buhari spoke Wednesday in Abuja, just hours after the electoral commission declared him the winner of Saturday's election. He defeated President Goodluck Jonathan by more than two million votes.

President Jonathan called for peace, saying "the unity, stability and progress of our dear country is more important than anything else."

Mr. Buhari added that his new government will "spare no effort" to defeat the insurgent Boko Haram. 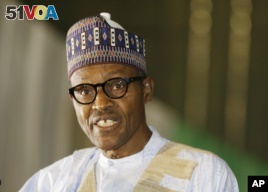 Nigerian former General Muhammadu Buhari speaks moments after he was presented with a certificate to show he won the election in Abuja, Nigeria, April 1, 2015.

Iraqi forces battling Islamic State militants for control of Tikrit are close to retaking the city. The militant group has controlled the city since last June.

A government official in Tikrit told VOA that he expects Iraqi forces to completely retake the city "within hours." He said the U.S.-led coalition airstrikes are still occurring in Tikrit.

The battle for Tikrit is an important step for Iraqi troops to move on the city of Mosul. Prime Minister Haider al-Abadi, who is in Tikrit, congratulated Iraqi forces on what he called a "historic milestone."

The chief executive of German airline Lufthansa says it will take a "long, long time" to find out exactly what led a co-pilot to crash a jetliner into the French Alps. The crash killed all 150 people aboard the flight.

Lufthansa CEO Carsten Spohr paid his respects to the victims Wednesday at the site of the Germanwings crash in southeastern France. Thomas Winkelmann, the chief executive of Germanwings, the budget airline owned by Lufthansa, joined him. The two men laid flowers at the crash site to honor the victims.

Mr. Spohr ignored many questions from reporters about why the airline allowed 27-year-old Andreas Lubitz to fly. The co-pilot reportedly told the airline in 2009 that he had had a "serious depressive episode."

The world's oldest person, a Japanese woman, died Wednesday. Misao Okawa was 117 years old. She died of heart failure at a nursing home in Osaka, Japan.

embrace – v. to accept (something or someone) readily or gladly

ignore – v. to refuse to show that you hear or see (something or someone)

episode – n. an occurrence of an illness