Update Required To play the media you will need to either update your browser to a recent version or update your Flash plugin.
By Bryan Lynn
06 September, 2018


India's Supreme Court has struck down the country's long-standing ban on gay sex.

In a decision announced Thursday, all five judges who considered the case agreed that the ban should be removed.

In reading the court's decision, Chief Justice Dipak Misra said the law "had become a weapon for harassment" against members of the LGBT community.

The law barring sex between members of the same sex was first introduced by India's British colonial rulers in 1861. The criminal act was punishable by up to 10 years in prison.

The law was ended in 2009 by the Delhi High Court. But it was brought back in 2013 by the Supreme Court, making India one of the few countries that outlawed gay sex. 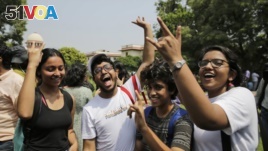 But the latest Supreme Court decision found that sexual orientation is "biological" and should not be used to discriminate. Chief Justice Misra said, "social morality cannot be used to violate the fundamental rights of even a single individual."

Another justice, D.Y. Chandrachud, said while the court cannot change history, it can "pave a way for a better future."

India's conservative government had opposed ending the law. But officials said they were leaving the decision to the "wisdom" of the Supreme Court. However, the government had warned that judges should not change laws relating to marriage rights.

Rights groups and members of India's LGBT community had campaigned for the Supreme Court to end the gay sex ban. Some celebrated in the streets near the court in New Delhi -- cheering, dancing and waving flags.

"We feel as equal citizens now," activist Shashi Bhushan told the Associated Press. "What happens in our bedroom is left to us."

"I am speechless!" college student Rama Vij told the French Press Agency. "It's taken a long time to come, but finally I can say I am free and I have equal rights as others."

One of the people responsible for bringing the case to the Supreme Court was Debottam Saha, who spoke to Reuters. "I'm so excited, I have no words," he said.

The head of the Muslim-led JIH (Jamaat-e-Islami Hind) political group condemned the court's decision. In a statement, Muhammad Salim Engineer said ending the ban on gay sex had put India on a path toward "moral degradation."

The statement said the JIH "believes in the fundamental rights of all citizens." However, legalizing gay sex "ignores religious teachings, our culture and the opinion of the overwhelming majority of the people," it added.

A leader of the conservative nationalist group RSS (Rashtriya Swayamsevak Sangh) noted the organization does not believe that being gay should be a crime. However, the group said Indian society "traditionally does not recognize" gay relationships.

Debottam Saha said India's LGBT community will still likely face much discrimination. "We are no longer criminals, (but) it will take time to change things on the ground -- 20 to 30 years, maybe," he said.

Sukhdeep Singh is a gay rights activist and editor of the magazine Gaylaxy. He said the community still has a long way to go "to be legally with your partner."

But he added that the court decision has surely opened the door for more changes in the future. "This is the first battle that has been won and there are many more battles that we are going to fight," he said.

Bryan Lynn wrote this story for VOA Learning English, based on reports from the Associated Press, Reuters, Agence France-Presse and other online sources. Kelly Jean Kelly was the editor.

gay – adj. sexually attracted to someone who is the same sex

harassment – n. making repeated attacks against someone or something

fundamental – adj. relating to the most important or main part of something

pave a way for – v. expression (v.) to make it easier for something to happen or for someone to do something

degradation – n. the act of damaging the quality of condition of something