Update Required To play the media you will need to either update your browser to a recent version or update your Flash plugin.
By Kelly Jean Kelly
04 September, 2018

On the first day of the hearing, protestors shouted their disapprovals as Kavanaugh promised to be a "team player" on the court. The remark was notable because the nine justices on the Supreme Court can act like nine separate law firms. And, when the group decides cases, justices often split into the same two groups – conservative and liberal.

But Kavanaugh appeared to reject the idea that he would be on either the conservative or liberal side. He said he would not decide cases on his personal views. Instead, he promised to decide cases "according to the Constitution and laws of the United States."

However, independent observers note that Kavanaugh's earlier rulings as a judge are generally considered conservative. 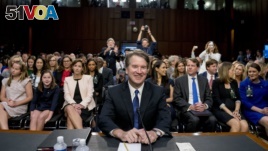 Kavanaugh is 53 years old. He has served for the past 12 years on the appeals court in Washington, DC. That court is believed to be the second most important court in the country, after the Supreme Court.

However, since then Kavanaugh has said U.S. lawmakers might pass a law protecting presidents from investigations while they were in office. He has said that the work of defending themselves can interfere with the president's job of leading the country.

As the hearing continues this week, lawmakers will ask Kavanaugh questions about his point of view on how much power presidents should have. They will also ask him his thoughts on legal issues related to abortion, gun rights and other issues.

Witnesses will also speak about Kavanaugh.

After the hearing this week, lawmakers will vote on whether to approve Kavanaugh for the Supreme Court. If he is accepted, he could begin work as early as October 1. And, since U.S. Supreme Court justices serve for life, Kavanaugh could influence laws for a long time to come.

Kelly Jean Kelly wrote this story for VOA Learning English with reports from the Associated Press and VOA News. Hai Do was the editor.

justice - n. a judge in a court of law

impeachment - n. to charge a public official with a crime done while in office

abortion - n. a medical procedure used to end a pregnancy and cause the death of the fetus