Update Required To play the media you will need to either update your browser to a recent version or update your Flash plugin.
By Bryan Lynn
01 October, 2019


In India, a nationwide ban on single-use plastic products went into effect this week.

Indian Prime Minister Narendra Modi has said his government's goal is to make India completely free of single-use plastics by 2022. Single-use plastics are products designed to be used only once and then thrown away. These include plastic bags and products used for eating and drinking.

As the country prepares for the new rules, one Indian state is looking back on its decision to ban plastic bags 21 years ago.

The state of Sikkim, in India's northeast, launched the ban in 1998. State officials took the action after heavy rain caused several major landslides in the area. Experts partly blamed plastic waste for blocking systems that carry away rainwater. 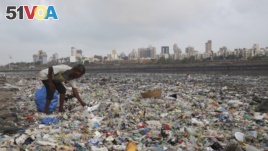 In this June 4, 2018, photo, a man collects plastic and other recyclable material from the shores of the Arabian Sea, littered with plastic bags and other garbage, in Mumbai, India. (AP Photo/Rafiq Maqbool, File)

People living in the state say major education campaigns and enforcement measures got citizens to accept the plastic bag ban.

Priyadarshinee Shrestha is a team leader with the World Wildlife Fund in Sikkim. She told VOA there was "a lot of policing" during the first days of the ban. "There were fines if people were caught carrying plastic bags," Shrestha said.

Prabha Sherpa sells products in a store in the state capital, Gangtok. She told VOA that major public education campaigns were very helpful in turning people against plastic bag use.

She says she remembers young children explaining to her that they had been taught at school about the environmental harms of plastic. Dealing with the material is particularly a problem in Sikkim, where Himalayan mountainsides leave limited space for waste dumps.

"We stopped using it happily because we understood that it is good for us," Prabha Sherpa said. She added that many people have willingly followed the plastic bag ban.

Most people shopping at the city's main vegetable market bring their own cloth bags to collect their goods. Restaurants in the area serve food on plates made of paper or plant material instead of plastic.

Some believe Sikkim's small size – with just over 600,000 people - helped make the campaign a success. Studies in recent years by environmental groups found that the bag ban was more successful in Gangtok and nearby towns than in outlying areas.

Environmental groups say that while the state's plastic bag ban has generally worked well, other plastics remain a problem. Among those still commonly seen are polypropylene bags, which look like cloth but are made of plastic. A lot of plastic material is used in single-use food packaging also. In addition, tens of thousands of visitors to the state leave behind thousands of empty plastic water bottles.

Rajendra Gurung is head of the Ecotourism and Conservation Society of Sikkim. He told VOA it is a difficult problem because "plastic is so omnipresent." His organization has called on companies to create environment-friendly water containers but he says "that is not happening."

Some communities are taking action. In the northern village of Lachen, visitors are banned from bringing in plastic bottles or leaving plastic waste. Many tourists learn about the ban from local taxi drivers. The community-driven project came about as the result of a cleanup organized by volunteer groups.

Anjana Pasricha reported this story for VOA News. Bryan Lynn adapted the report for Learning English, with additional information from Reuters. Caty Weaver was the editor.

bag – n. a container made of thin material (such as paper, plastic, or cloth) that opens at the top and is used for holding or carrying things

packaging – n. materials objects are wrapped in before they are sold

omnipresent – adj. present or having an effect everywhere at the same time