Update Required To play the media you will need to either update your browser to a recent version or update your Flash plugin.
By Ashley Thompson
11 October, 2016

Forget the presidential candidate with his name in gold lettering on tall buildings in New York City.

And forget his main opponent, the woman who visited 112 countries while serving as America's top diplomat. 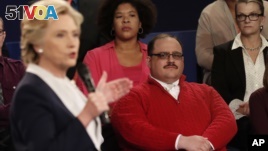 What the United States apparently needed in this election campaign season was an undecided voter who had a question. They needed Ken Bone, a 34-year-old coal plant worker.

Bone was one of several undecided voters chosen to ask questions at the presidential debate last Sunday in St. Louis, Missouri. Each one said they had not yet decided on whether to vote for Donald Trump, the candidate of the Republican Party, or Democratic candidate Hillary Clinton.

During the debate, Bone asked Clinton and Trump: "What steps will your energy policy take to meet our energy needs, while at the same time remaining environmentally friendly and minimizing job loss for fossil power plant workers?"

Ken Bone's few seconds on national television has made him famous on social media and beyond. In what Twitter said was the most tweeted debate of all time, talk of Bone -- especially his clothing -- spread quickly.

Thousands of people posted photographs of Bone in his red sweater. He wears eyeglasses and has a mustache. People commented that he looked friendly and nice, two things they found to be lacking in the debate.

Since the debate, Bone has appeared on several television programs, including NBC's Tonight Show, NBC News, CNN, and Fox and Friends.

He also now has more than 100,000 Twitter followers. He said he had just seven followers before Sunday.

Much of the attention has centered on Ken Bone's bright red sweater. Bone explained that he had planned to wear a more formal suit. But, he admitted that those clothes had simply gotten too small for him.

He told CNN, "When I went to get into my car the morning of the debate, I split the seat of my pants all the way open. So the red sweater is Plan B. And I'm glad it worked out."

The red sweater has become so famous that it has sold out on Amazon, the online marketer. By Tuesday, you could only find the sweater in other colors on Amazon.

Izod, the maker of Bone's sweater, said Monday that "Great style is something we can all agree on!"

On Tuesday, Ken Bone posted a photo of himself on Twitter, without the iconic red sweater. He wrote, "I took off the sweater between interviews, do you forgive me?"

Chris Hannas wrote this report for VOA News. Ashley Thompson adapted it for Learning English, with additional materials. George Grow was the editor.

plant - n. a building or factory where something is made

minimize - v. to make (something bad or not wanted) as small as possible

fossil (fuel) - n. a fuel (such as coal, oil, or natural gas) that is formed in the earth from dead plants or animals

post - v. to write and add an online message

sweater - n. a warm usually knitted piece of clothing for the upper part of your body